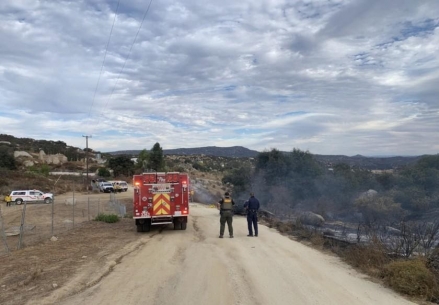 By Miriam Raftery
Photo courtesy of Cal Fire
November 9, 2020 (Potrero) – Firefighters responding to a brush fire that charred three acres in Potrero found the bodies of a man and a dog in the back seat of a burned vehicle last Thursday.
San Diego Sheriff’s Lieutenant Ricardo Lopez said the vehicle appeared to have skidded off Hartley Hill Road, a dirt route, near Round Potrero Road before catching fire, the San Diego Union-Tribune reported.  Homes were briefly threatened Thursday afternoon before fire crews doused the blaze by early evening.
Investigators believe the victim was the vehicle’s driver, who apparently tried to rescue a dog in the backseat before both were engulfed by the fire.
No vehicle description was provided by authorities and the victim’s identity has not yet been released.  The county Medical Examiner’s Office will determine cause of death and confirm the identity of the deceased.