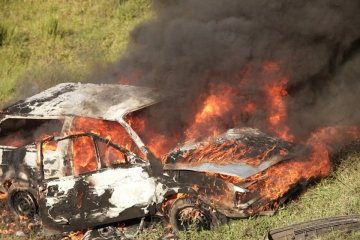 August 12, 2018 (San Diego's East County) - Fire investigators recently announced that the cause of the deadly Carr fire in Redding was a flat tire on a trailer. When the rim scraped the concrete roadway, it sparked a fire.

Wildfires are the biggest disaster risk San Diegans regularly face, and most are caused by people in some way. In fact, vehicle-related fires are in the top two causes of wildfires in the County. These fires can be a vehicle engine catching fire because it is poorly maintained, a failing catalytic converter, a flat tire, someone dragging a metal chain, or perhaps pulling over in a brushy area on the side of the road and igniting the dry grass.

“People just need to be really cognizant and think about the fire danger risk when they’re driving and need to pull over,” said Kendal Bortisser, CAL FIRE and County Fire captain. “People pull off the side of a road for a number of different reasons like changing drivers, getting a phone call, vehicle trouble or someone being sick. Sometimes people are unaware that if they pull off the road and there’s grass, it could catch fire.  It could be a really bad move.”

As the hot weather and dry conditions continue, it is important for everyone to be vigilant about fire prevention. In order to be aware, Bortisser discussed the top causes of fires in the County areas in the last two years.

In cases in which the investigator was able to determine a cause, most wildfires this year and last were caused by vehicles (see graphics below for other top causes). 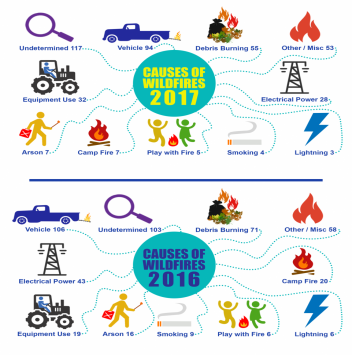 Photo, right:  The top causes of wildfires in San Diego County in 2016 and 2017. Information provided by CAL FIRE.

Catalytic converters often ignite fires, Bortisser said. Sometimes a catalytic converter, which is located under a vehicle’s engine, can literally explode, spitting out hot chunks of metal that can cause fires without the driver even realizing it. The driver inadvertently may be starting various fires as he or she continues along a roadway.

Sometimes, drivers may simply decide they want to pull over on the side of the road or drive into a field to sightsee or make a phone call. But if there is brush or grass under the car, it can catch fire from a normally operating catalytic converter, Bortisser said.

Improperly maintained oil or brake systems can also spark a fire, he added.

If drivers have to pull over, Bortisser recommends they do so on paved surfaces whenever possible, rather than off the road where brush or trees can ignite. If a car does catch fire, people need to exit it as quickly as possible and move to a safe area away from traffic.

The next step should be to call 911 to report the fire, he said.

After this step, if a motorist has a fire extinguisher in his or her vehicle – which Bortisser recommends – they can try to extinguish the fire as long as they are not risking injury to do so. If the car fire overwhelms the extinguisher, the extinguisher can at least start to control the fire until firefighters arrive on scene, he said.

San Diego County residents can also take additional steps to prepare themselves, their families and homes for wildfires and emergencies. San Diegans are reminded to prepare now and lessen that risk around their homes and communities. This can be done by creating or updating a family disaster plan that everyone in the home is familiar with, having an evacuation bag to grab in case residents only have less than 15 minutes to go, and gathering emergency supplies  for themselves and each person (and pet) in their household to survive on for three days or more.

San Diego residents can prepare for fires by maintaining good defensible space around their home, registering for AlertSanDiego, the region’s mass notification system, and downloading the County’s free SDEmergency App.

“What we’re seeing now with the recent fires could potentially be the new normal. We’re moving into year-round fire season as a result of the conditions we are seeing. We are in a multi-year drought — we got a little rain last year, and now it seems we’re right back in it,” Bortisser said.

Downloaded the Cal Fire app via Google Play and it functions quite nicely. It's Free and easy to do, with many nice features.