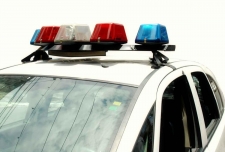 NBC 7 news visited the scene and interviewed residents. According to NBC 7's report, the vehicles struck include a Toyota Camry, a Toyota Prius and a Ford F-150 pickup truck.