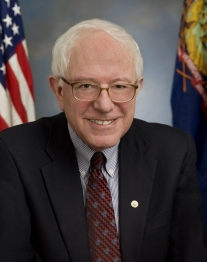 Sanders isn’t your typical presidential contender.   He’s been the only independent member of Congress since 2007 – until announcing he will run as a Democrat for the presidency.  He’s also an avowed “democratic socialist”, a progressive, and he's Jewish.

Running on a populist platform, Senator Sanders has long been a vocal advocate for economic justice, denouncing the growing income gap between billionaires and ordinary working Americans.So how might his candidacy impact the race?

In typical low-key Sanders style, the Senator did not hold a press conference or set up an elaborate webpage.  Announcing his candidacy in an e-mail to his supporters, Sanders said Thursday: “This campaign is not about Bernie Sanders. It about a grassroots movement of Americans standing up and saying: ‘Enough is enough. This country and our government belong to all of us, not just a handful of billionaires.’” 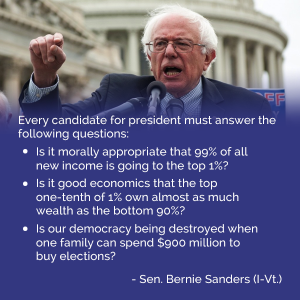 He has called for a massive investment in infrastructure projects to put Americans to work.  He voted against the Bush bail-out of big banks and unlike Clinton, voted against the first Gulf War.  He supports universal healthcare, co-sponsored a major bill to combat global warming. He opposes the Keystone Pipeline and is against the Trans-Pacific Trade Pact, which Clinton has not yet taken a stand on.

I heard Senator Sanders speak back in 2005 at the National Media Reform Conference in Memphis. .Back then, he called media reform a "moral issue", calling for reinstatement of the Fairness Docrine and a halt to media deregulation in order to protect consumers from monopolies.

“Don’t under-estimate me,” Sanders says of his candidacy, adding,”We’re in this race to win.”  It’s worth noting that just eight years ago, many political analysts didn’t think Americans would elect a black liberal Senator with a middle name Hussein.

But Sanders lacks both a party machine and backing of big money interests.  His site on Facebook has attracted nearly a million likes, but most political analysts consider Sanders a long shot to wind up in the White House.

Still, his candidacy changes the campaign, forcing a focus on issues he will no doubt bring up in debates and on the campaign trail. Sanders’ run for the presidency could pull Hillary Clinton to the left and prevent the growing pack of Republican contenders from dodging debate on issues such as income inequality.

That's about as likely as Jay Leno being the president.