On a dark, cloudy night in 1961, Lt. J.G. Thomas Allen Ryan, 23, crashed a Navy jet fighter plane onto a mountainside in Lakeside. Four decades later, a group of Lakeside residents hiked to the crash site to pay homage to the military pilot’s memory. 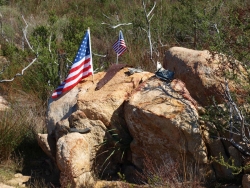 November 11, 2010 (Lakeside)--A Lakeside hiking group celebrated Veterans Day in an unique way recently. Dennis Richardson led his hiking group over rocks, through brush, over boulders and up, up a mountain to the site of an old military airplane crash site.  Scroll down for the full story, plus view a video of the event by Billy Ortiz.

Pat Macha, an airplane crash site archeologist from Orange County, came to town to do a survey and document the wreckage. Macha has researched and observed over 800 crash sites in the USA and has written three books on his observations. On this hike, he set up two U.S. flags by the wreckage and led the hiking group in a brief memorial to honor the pilot who died in this crash back in 1961. 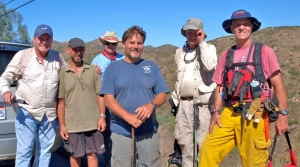 According to Macha’s research, the plane was a Navy F3H-2 jet fighter. Lieutenant J.G. Thomas Allen Ryan, the pilot, was only 23 years old. He was on his way back to Miramar Naval Air Station with his squadron, a group of four in the formation. The others were able to stay with their flight leader and landed safely. For unknown reasons, Thomas crashed into the side of the mountain; darkness, clouds and poor weather conditions played a role in the accident. 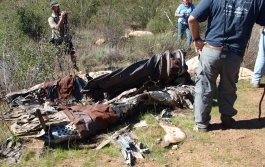 After careful observations, Macha and Maloney came to the conclusion that the plane impacted lower down the side of the mountain. To their surprise, the airplane engine was blown up toward the top of the mountain--sitting precariously and plainly in sight; debris covered a half-mile area. The crash had been hidden by thick brush for many years until the Cedar Fire in 2003, when the wreckage was suddenly visible. Macha stated that most folks don't realize how many airplane crash sites there are in the U.S. that happened during routine training exercises, especially with the older planes of the ‘40s and ‘50s. Now with the newer technology the planes are much safer to fly. 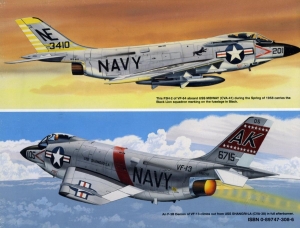 Ortiz, who was photographing the hikers’ expressions while viewing the crash site, said it was different for him because he was looking at everything through a three-inch viewfinder. When he got home and started editing his video his emotions started to flow and he was touched by the care Macha had put into the memorial for a pilot who had lost his life while protecting us. This was Ortiz' first time at filming an airplane crash site and he found it to be "absolutely exciting."

Hike leader Richardson, a photographer for East County Magazine, observed, "It is fun to go on a hiking adventure with a bunch of people and everyone got back safely. There are many other crash sites in East County, especially under the Miramar flight path." He reminded hikers that it is important that when folks find crash sites to not disturb them or take souvenirs away. He asked that if you know of other crash sites to please e-mail him with any details you have so he can do further research. His e-mail address is jarden88@cox.net.