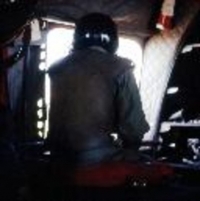 Editor’s note: Due to technical problems we could not post on Veteran’s Day, but wish to share this moving story now with our readers.

November 14, 2011 (Crest)--On Veterans Day, and on many other days, I remember Corporal Linden Eiler of Charlie Company, 228th Av Bn, 1st Air Cavalry Division. On April 25, 1968, Eiler had volunteered to join a CH-47 Chinook crew in retrieving a UH-1 Huey helicopter that had been shot down during the initial assault into the A Shau Valley in northern South Vietnam.

This had been a major operation. The North Vietnamese had controlled the valley for a long time and were well prepared defensively.

As the Chinook hovered over the downed Huey to attach a sling to bring the chopper out, they were ambushed by NVA forces who had been lying in wait. The Chinook crashed and four were killed, including Corporal Eiler.

At our home base at Camp Evans, we were living in 12-man tents. Eiler had the cot across from mine. He was a country boy from Indiana and a good soldier. He really wanted to fly. He was 21 years old I was 20.

I knew the other three casualties from Charlie Company - McManus, Delp, and McGee. They were great guys, and with my good friend Larry Higginson they are still with me - still 20-years-old, still laughing and joking and telling stories of home.

But Eiler has a special place in my memory because he had taken my place. The mission that cost him his life had originally been scheduled for the day before. I had volunteered for the mission. That morning, I had grabbed my steel pot, frag vest and M-16, and climbed aboard the Chinook (number Zero-Eight-Zero) and waited to go. We waited for over an hour. Then word came down that the mission was scrubbed due to low clouds over the A Shau Valley limiting visibility.

The next day, April 25, they asked for new volunteers. In my stead, Linden Eiler grabbed his steel pot, frag vet and M-16, and boarded Chinook #080.

I shielded my eyes from the sun as the chopper lifted off and on this now cloudless day, headed toward the valley.