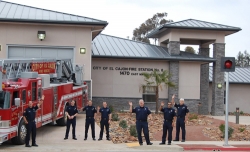 El Cajon firefighters were cooking their dinner on the patio of Fire Station 8 when they also spotted smoke.

“They immediately responded, arriving on the scene within three minutes, where they found a trailer home at the park fully involved,” a press release from the City of El Cajon stated. “With about twenty firefighters on scene the fire was knocked down in less than 15 minutes, saving nearby trailer homes.” San Miguel Fire Protection District also assisted in battling the fire.

After the blaze was extinguished, firefighters searched the trailer and found Hunter’s body. Cause of the fire was unsafe use of smoking materials, according to El Cajon Fire officials. The victim’s age and marital status are unknown, according to the Coroner, though a City press release listed her age as 64. Estimated loss of the trailer and its contents is $75,000.

Just wanted to thank whoever posted that comment about the picture thank you I strongly agree considering thats my grandma who did attend roosevelt junior and high school but her maiden name wasnt constance it was covert she is dearly missed I LOVE YOU GRANDMA! MOM DOES ALSO EVERYDAY<3

Can anyone else see how this image of firefighters waving gleefully at the camera is a really poor choice of image to accompany a story about a woman dying in a fire?

A fire is really a terrible thing. Once you've been through an experience like this one you are never the same... Imagine losing all your belongings from your fridge to your furniture... it's a disaster. This is why insurance is a must.cabinets Tucson

Trying to determine if this is my childhood friend known as both Karen Hunter and Karen Constance. The age is right. She attended Florence Elementary School, Roosevelt Junior High and high school in El Cajon, Ca.

Judy - I don't know; you might call the County Coroner's office and see if they can give you more info. I did a quick news search and all the publications have the same info that we do.  Also the City of El Cajon may have more.  If you find out please let me know. I'll ask the city's PR person, too.