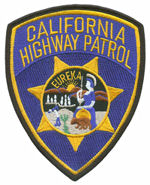 June 7, 2012 (Lakeside) – Martin David Erickson, 47, of Lakeside was killed in a solo motorcycle accident June 4 at 7 p.m. According to witnesses and physical evidence, he was riding a 2004 Yamaha motorcycle at a high rate of speed on Ashwood Street north of Mapleview, when he lost control, collided with a rocky embankment and was ejected onto the roadway.
Erickson suffered blunt force trauma and died at the scene.  Ashwood was closed temporarily during the investigation. According to Officer Brian Pennings with the California Highway Patrol, at this time there is no evidence that drugs or alcohol were a factor.