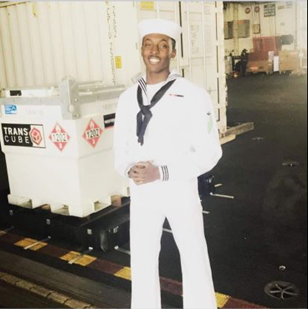 April 27, 2021 (La Mesa) – La Mesa Police have identified Cornelius Donte Brown, 22, as the victim shot and killed April 24 after answering a knock at the door of his apartment at 4306 Echo Court. Originally from South Carolina, Brown was on active duty with the U.S. Navy, stationed at Naval Base Coronado.

Witnesses inside the apartment told police that two black men in ski masks and black hooded sweatshirts were outside; one fired three shots at the victim, striking him twice, according to Lt. Gregory Runge with La Mesa Police.

“Officers administered CPR to the victim until paramedics arrived and transported him to Sharp Memorial Hospital. Unfortunately, the victim succumbed to his injuries and died during surgery at the hospital,” says Lt. Runge.

The suspects fled on foot southbound on Echo Court and then eastbound on Echo Drive. Their identities and motive are unknown.

If you have information regarding this crime, contact the La Mesa Police Department at (619) 667-1400 or lamesatips@cityoflamesa.us. You may also call Crime Stoppers’ anonymous toll-free tip line (888) 580-TIPS (or visit www.sdcrimestoppers.com).

You can remain anonymous, and be eligible for a Crime Stoppers reward of up to $1,000 for information leading to an arrest in this case.