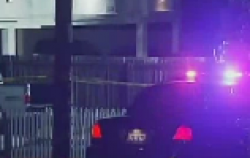 January 11, 2012 (Spring Valley) – Jay Newman, 53, has been identified by the San Diego Medical Examiner’s office as the victim in last night’s deadly fight in the 3600 block of S. Cordoba Avenue in Spring Valley.

Sheriff’s deputies have arrested John Guy Durham, 55, who will be charged with murder, according to a press release from the Sheriff, which also revealed new details on the crime.

“Deputies arrived within 3 minutes and observed bystanders performing CPR on a male who had been involved in the altercation,” Lt. Larry Nesbitt with the Sheriff’s Homicide Detail said. “Deputies relieved the bystanders and continued performing CPR. Personnel from the San Miguel Fire Department arrived and began treating the male.” The victim was transported to a hospital, where he was pronounced dead.

According to Lt. Nesbitt, the victim and the suspect "had been been acquainted for a long time."

Although Durham faces a murder charge, the Coroner’s office does not yet list a cause of death pending autopsy. ECM news partner 10 News quotes a family friend who did not want to be identified but indicated that Newman suffered from asthma. “I think that would put him at a great disadvantage because he would get short-winded very quickly,” said the source.