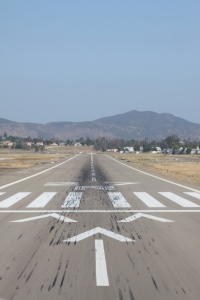 Photo: Runway at Gillespie Field, where the plane departed from on Wednesday

August 26, 2018 (Descanso) — David Alan Derby, 77, of Santee and Ryan Michael Willis, 36, of San Diego were killed in a plane crash near Descanso on Wednesday.  The plane, a single-engine 1682G Champion 7KCAB, was owned by Derby’s company, Three Point Partners Inc.

The plane departed from Gillespie Field in El Cajon and was reported missing when radio contact was lost. According to the Medical Examiner’s report, the state Office of Emergency Services provided radar showing a steep descent that helped narrow the search field.

The wreckage was found on Thursday near Tule Springs and Conejo Grade Road east of the El Capitan reservoir, the Sheriff’s department reported.

Cause of the crash has not been determined. Derby was an experienced pilot who held a license for the past 15 years. The National Transportation Safety Board and the Federal Aviation Administration are investigating.