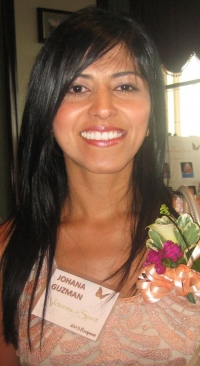 June 13, 2013 (San Diego)--“When I woke up, I was confused, I was terrified,” recalled Santee resident Johana Guzman, who was in a coma for two weeks after she was struck by a car while trying to protect her 2-year-old son.  With help from Sharp Hospital’s Rehab Services, she overcame her injuries and now helps others. “We are warriors,” she said. “Hard times are opportunities to be better,” she told ECM. “I believe inner strength heals us, helps us to see clearly the value of life. We must never give up our dreams.”

On May 31, Guzman was honored at the annual Victories of Spirit event at Manchester Grand Hyatt in San Diego. Four individuals and one organization received the Eagle Spirit Award, named for the most potent healing symbol of the Navajos. Honorees also included Mike Buxbaum, Anne Herman, and Zach Meno of La Mesa for patient achievement. San Diego State University Fitness Clinic for Individuals with Disabilities was honored for community achievement.

“This is my first Victory of Spirit Celebration. I’m honored to be here,” Martinez exclaimed proudly. “Just a few months [ago], in late January, this became very personal for me.” He reflected on his father having a brain tumor, then surgery. “I got to witness first hand how important rehab is,” he recalled. “I want to thank you for all of your hard work in rehab. I’m happy to report that my dad’s doing better.”

Martinez presented videos and bios on each honoree, starting with Zach Meno of La Mesa, who suffered a stroke one day and his left side became paralyzed. Meno worked hard to regain his mobility and now uses a cane to help him get around. He has been peer mentoring and sharing his story with others. In the video, he recalled his accident and reflected on the long journey of rehab. He expressed his appreciation to the people at Sharp who helped him.

Guzman, originally from Columbia, was hit by a car in April, 2010 while walking home from the park with her 2-year-old son, Joshua. By protecting him, she got the full impact. She had extensive injuries, including a brain injury and multiple fractures. Her son, who was thrown 40 feet, survived and has fully recovered.

Guzman received physical, occupational, and speech therapy at Sharp Rehab. Now, she volunteers at Rio Seco School, and Casa Estrella Orphanage in Rosarita, Mexico. She also peer mentors other patients, and has been hiking and kayaking with her family. While she was in the hospital, she read her Bible and found encouragement in Isaiah 40:31, which reads, “But those who hope in the Lord will renew their strength. They will soar on wings like eagles; they will run and not grow weary, they will walk and not be faint.”

SDSU Fitness Clinic, which was founded in 1983 by Dr. Peter F. Aufsesser, also received an award. Director Jan Thurman, students, and clients shared their testimonies in the video.

Another honoree was Mike Buxbaum, a drummer in a local band, A City Serene. While on tour in September 2009, the tour bus got hit by a truck. Buxbaum suffered a traumatic brain injury, couldn’t use his right hand, and needed a chest tube. Through his positive attitude and love of music, he made remarkable strides. He now volunteers at an elementary school, counsels other brain-injured patients at Sharp Rehab, and works at Vons. He even took up drums again.

In 1968, the car crash occurred, injuring her spinal cord, leaving her in a wheelchair and becoming a quadriplegic. She had grown up swimming and still swims to this day, in addition to skiing. Her husband, Paul Herman, is also in a wheelchair and they have a grown son, Donald.

For more information about Sharp Rehab and this event, visit: http://www.sharp.com/rehab/victories-of-spirit-celebration.cfm.

For information on the next benefit event for the facility, the 27th Annual Sharp Rehab Golf Tournament, visit: https://www.sharp.com/sharp-foundation/annual-golf-tournament.cfm.