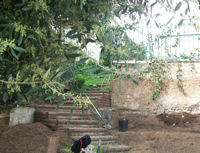 By Ariele Johannson
March 12, 2012 (San Diego)--When I was growing up on Long Island, New York, my family often visited my grandparents who lived in Jamaica, Queens. Upon arrival at their home on 130th Avenue, we would go right out the back door into Grandma Rheba’s garden. I was small and remember it as if it were a lush secret garden with really tall plants; hollyhocks and tall vines of beans and peas trained onto strings reaching up to the sky. Besides being unexpected, it went on forever wrapping around a little shed and an abandoned car into another whole growing area next to a parking lot. We kids were always allowed in the garden. The city traffic whizzed by, but I don’t think I ever heard it. I was in some kind of a heaven.
Growing one's own food to turn into homemade meals is high on the list of satisfying human experiences for many of us in our distant or recent memories. Yet we don't have to wonder why more people today don’t grow their own food: no time, no green thumb, poor soil, no green space, mediocre crops, and impatience with nibblers and thieves (rodents).
Today, industrial farms deliver to grocery stores, and that is the mainstay for the majority of American families. Happily, there are exceptions: serious gardeners, Farmers Markets who support organic farmers, and Community Supported Agriculture Programs. To locate a CSA, link to our East County CSA Directory: http://eastcountymagazine.org/node/8530.
But what if an organization were to help people build cost-efficient, sustainable gardens and provide classes with hands on experience? I think many would be willing to garden or garden again. In only three years, Victory Gardens of San Diego, a program of San Diego Roots Sustainable Food Project, has helped create over 50 gardens for individuals, families, schools, and churches. After attending three classes, which includes volunteering, applicants are eligible for a garden build at their home or the green space someone else has donated. Labor is provided by volunteers.
Every home garden is built for free. Recipients may, and often do, make a donation back to Victory Gardens, “growing it forward,” to pay for the next garden. Any cost shortfalls are filled with grants and other donations.
Some volunteers train to be Garden Guides. A Guide can be assigned to coordinate a garden build, completed in one day for a family or individual garden. This process builds capacity for the organization; more trained volunteers and guides means more gardens can be built. Also, the organization takes on the challenges of building gardens in odd spaces.
From the start, the organizers of Victory Gardens of SD met with food groups to see if this program was actually needed. They’ve found their answer in the last three years. They have retained these networking resources since then for referrals. VGSD is especially proud of The Serra Mesa Community Garden and Orchard. This project connected two churches and the SD Food Bank. They turned a dirt parking lot into a community garden with 40 beds and an orchard of citrus and stone fruit trees. Most importantly, VGSD, through their Garden Education Class, was able to help the gardeners at Serra Mesa develop a strong organization with clear rules and responsibilities. Currently, there are six Regional Garden Education Centers across SD County, including Spring Valley and East County Communities Center where participants can take classes. The phone number to contact for class schedules is 619-221-8600, Ext. 229.
This past weekend, I was invited to attend a Scout (Phase I) in San Diego and a Garden Build (Final Phase) in Lemon Grove. The Scout at the San Diego home was led by Richard Winkler, assisted by Charles Anacker and Hilary Kearney. A Scout is the initial consultation with the applicant to take measurements, ask questions, scan the sky for the path of the sun, and ascertain the kind of garden to create and materials needed. Sometimes, as in this case, there are issues to be ameliorated. Sarah, the homeowner, had removed debris and completed soil testing for an unused area of her property. She found the amount of lead in the soil was twice the normal limit. A suggested remedy is to plant mushrooms, sunflowers, and comfrey, which will not be eaten. Earthworms will also help remedy lead. The process takes six months to a year if the gardener does not want to replace all of the soil.
When I first came down the narrow alleyway and through the gate into the lush backyard in this hilly San Diego neighborhood, I had a flash of Grandma’s garden. I thought, “There must be some mistake. She already has her garden, and she has a green thumb!” She even has a small three-tier gutter garden mounted on the fence in one area with herbs and small plants flourishing high off the ground. While waiting for the others to arrive, Sarah showed me the abandoned lower area, site of a small 1920’s home, since demolished. Sarah’s goal is to get the help and expertise needed to make a garden there; to grow more food and share it with her neighbors who do not have any usable space. The consultation gave Sarah ideas on how to utilize her space creatively. VGSD will return within two weeks to build her garden.
When I arrived at Paula’s house in East County, the site of the garden build for that day, I found out from her daughters that the family had wanted a garden for a few years. Paula’s gratitude showed when she brought me over to her new garden, built that morning by Bob and Garden Guide Katherine, garden guide trainees, Paula, and her family. 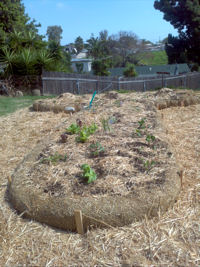 This garden was built on top of the grass in a T shape and outlined with straw wattle (used for erosion control). Two days earlier, the grass had been sprinkled with vinegar and covered with large pieces of cardboard. Stakes were placed around the wattle at two feet intervals. The T space was then filled in with amended soil, 50% soil and 50% compost, purchased from City Farmers Nursery on Euclid Ave. This made building her garden less labor-intensive. They chose to grow strawberries, tomatoes, bell peppers, lettuce, onions, basil, and in mounds in the top part of the T, the 3 sisters: corn, beans and squash. Gardening is bringing them together in a new shared effort, well before the harvest gets to the kitchen.
Bob Greenamyer believes the strength of the program lies in the fact that it “brings people together under the simple bond of food. It builds a neat community of people. There is no competition. It is all volunteer.”
Teach someone to garden and they can grow their own food their whole life, like my grandmother did till she was 90 years old. She modeled this lifestyle for my father and her grandchildren, who all learned from her the love of gardening.