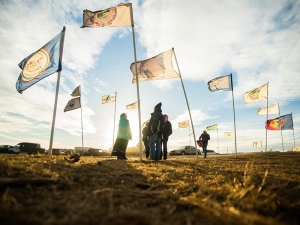 “This decision marks an important turning point. The federal courts have stepped in where our political systems have failed to protect the rights of Native communities.” –Jan Hasselman, Attorney, Earthjustice

June 14, 2017 (Washington, D.C.)  — The Standing Rock Sioux Tribe won a significant, though not total, victory today in its fight to protect the Tribe’s drinking water and ancestral lands from the Dakota Access pipeline.

A federal judge ruled that the federal permits authorizing the pipeline to cross the Missouri River just upstream of the Standing Rock reservation, which were hastily issued by the Trump administration just days after the inauguration, violated the law in certain critical respects.

In a 91-page decision, Judge James Boasberg wrote, “the Court agrees that [the Corps] did not adequately consider the impacts of an oil spill on fishing rights, hunting rights, or environmental justice, or the degree to which the pipeline’s effects are likely to be highly controversial.” The Court did not determine whether pipeline operations should be shut off and has requested additional briefing on the subject and a status conference next week.

“This is a major victory for the Tribe and we commend the courts for upholding the law and doing the right thing,” said Standing Rock Sioux Chairman Dave Archambault II in a recent statement. “The previous administration painstakingly considered the impacts of this pipeline, and President Trump hastily dismissed these careful environmental considerations in favor of political and personal interests. We applaud the courts for protecting our laws and regulations from undue political influence and will ask the Court to shut down pipeline operations immediately.”

The Tribe’s inspiring and courageous fight has attracted international attention and drawn the support of hundreds of tribes around the nation.  “Water protectors,” as demonstrators called themselves, endured assaults by dogs, water cannons, mace and rubber bullets as they sought to protect sacred lands and precious water.

The Tribe is represented by the nonprofit environmental law firm Earthjustice, which filed a lawsuit challenging the U.S. Army Corps of Engineers for issuing a permit for the pipeline construction in violation of several environmental laws.

“This decision marks an important turning point. Until now, the rights of the Standing Rock Sioux Tribe have been disregarded by the builders of the Dakota Access Pipeline and the Trump administration—prompting a well-deserved global outcry,” said Earthjustice attorney Jan Hasselman. “The federal courts have stepped in where our political systems have failed to protect the rights of Native communities.”

The Trump administration has not commented on the court ruling.  However, the president praised his decision to authorize the pipeline during a speech last week in Cincinnati. “The Dakota Access pipeline is now officially open for business—a $3.8-billion investment in American infrastructure that was stalled,” he said. “Nobody thought any politician would have the guts to approve that final leg. And I just closed my eyes and said: “do it….It’s up, it’s running, it’s beautiful, it’s great.”

The president may have closed his eyes, but justice is not blind, and the court has given new life to not only the Standing Rock Sioux, but also other Native American tribes who hope the court could establish a precedent to protect tribal sovereignty over decisions involving tribal lands and the waters that served as the lifeblood of people on reservations.

The Court ruled against the Tribe on several other issues, however, finding that the reversal allowing the pipeline complied with the law in some respects.

The $3.8 billion pipeline project, also known as Bakken Oil Pipeline, extends 1,168 miles across North Dakota, South Dakota, Iowa, and Illinois, crossing through communities, farms, tribal land, sensitive natural areas and wildlife habitat. The pipeline would carry up to 570,000 barrels a day of crude oil from the Bakken oil fields in North Dakota to Illinois where it links with another pipeline that will transport the oil to terminals and refineries along the Gulf of Mexico.

For more background on this case, read the FAQ on this litigation at the Earth Justice site.

Isn't it nice our courts are so smart. They are experts on everything. I think we need to do away with all the other branches of our Government and let the Judges tell us what do do!

of course since it doesn't agree with the left wing line it must be a lie.
time to grow up there gene

So happy your finally posting sources and "Thank You" for the lovely poem! Your very talented!

Excerpt from your own posted link.

Standing Rock's environmental protection agency organized the camp cleanup with the help of the Thunder Valley Community Development Corp. from South Dakota's Pine Ridge Reservation, which has arranged for heavy equipment including front-end loaders, dump trucks and skid-steer loaders.
"We'll be here eight to 10 hours a day all week. Then we'll reassess the situation," returning next week if necessary, said Nick Tilsen, Thunder Valley's executive director.
People who still have not left the camp are helping, bringing the total on the job to about 100, said Tilsen, who is among the workers. Cost of the cleanup isn't yet known, but the tribe will use money from the $6 million in donations it has received to support its pipeline fight, Archambault said.
The tribe hasn't asked for help from the state or Morton County.

The protesters were there for six months, there was no trash service. They were given a deadline to leave. Your correct, they left a mess. Protesters were constantly fired on by a Blackwater associated Mercenary firm as well as Pepper Sprayed.

As usual you and Deserttrek give no sources. Is your mentor Alex Jones?