“As one of the first called to the table at Buffet at Viejas, I wish to say, ‘Thank you for a memorable feast. It was delightful.’”—Ariele Johannson
by Ariele Johannson
May 23, 2012 (Alpine)--The new Buffet at Viejas had its grand opening on Tuesday morning.  The fanfare included a tribal blessing from Kumeyaay elder Virginia Christman and traditional bird songs led by tribal member John Christman. Viejas Tribal Vice Chairman, Robert “Cita” Welch, addressed a crowd of tribal elders, leaders, local dignitaries, Chamber of Commerce representatives, public and the press during a ribbon-cutting ceremony. With the smell of sage in the air being prepared for the smudging, he called the new buffet at Viejas among the best in the San Diego area. 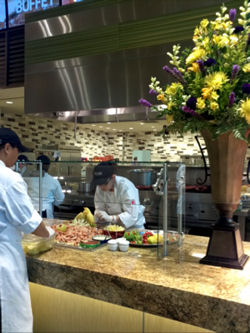 The new design focuses on an open and airy dining room and a clean, crisp serving area. Its completion culminates a year of similar renovations on the casino floor. Other elements which take the previous Harvest Buffet to an entirely new level are exciting new culinary offerings with upgrades to the variety and quality of the food, along with audio and visual features. 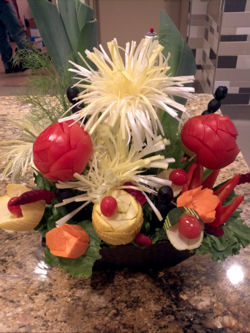 One of the restaurant’s notable impressions is its visually pleasing elements. The dining room that surrounds the floor to ceiling adobe brick fireplace is attractive with wooden tables on silver pedestals and white cushioned chairs. In between the food stations are fruit sculptures, fresh flowers, and prepared condiments and sauces. The attractive square plates are different colors for salads, entrees, and desserts; green, white, and red.
Insuring that guests experience a satisfying and relaxed meal, there is an abundance of wait staff, each one friendly and attentive. While enjoying the food, one can view the ever-changing culinary scenes which are projected along the top of the wall above the buffet area. Light jazz selections played in the background for this Grand Opening meal in the new restaurant.
For my own lunch, I chose many of my favorite foods. I’ll share just a few of my scrumptious moments. 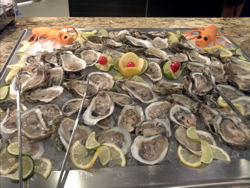 One of the soups du jour was a tasty New England clam chowder chock full of tender clams and soft potato morsels. For me, the oysters on the half shell were perfect with just a little lemon. Blue cheese crumbles and freshly cooked bacon pieces added taste and texture to my salad. A thick slice of prime rib was among the best I have ever enjoyed. The kielbasa was juicy and delicious.
I usually skip desserts at buffets, but the bakery was too spectacular. I had a small chocolate swirl of Dryers soft ice cream topped with M & M minis and a spoonful of Bananas Foster. After a chocolate covered marshmallow on a stick, I finished with one of the many cupcakes. I decided on the carrot cupcake with cream cheese frosting. This was no kindergarten cupcake;  it was a gourmet delight. It had plenty of icing to last through the cake, which was moist with a perfect light crusty top. 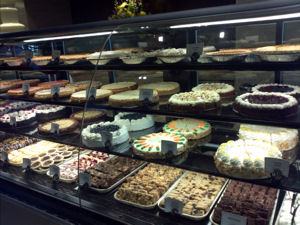 I want to extend my thanks to Robert Scheid, Vice President of Community and Public Relations, for inviting me to enjoy the buffet and kudos to Executive Chef Steve Robbins and the talented buffet team and staff. I remember the words of Viejas Casino General Manager Chris Kelley when he addressed the crowd before the ribbon cutting.
He said, “As team members and as a tribe, we all call San Diego home. It is a privilege to set our table for this community.” As one of the first called to the table at Buffet at Viejas, I wish to say, “Thank you for a memorable feast. It was delightful.”
The BUFFET is open from Sunday-Thursday from 11am-9pm and on Friday and Saturday from 11am-10 p.m. The price is $20.99 without a V Card. Members can save from 50-80%, depending on their member status.