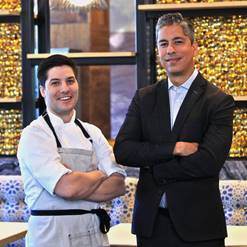 “Antonio’s creativity and innovative ideas will be a game changer for our new restaurants,” said Viejas Vice President of Food and Beverage, David Duran. “He’s greatly admired and I look forward to seeing his talented influence take guests to a new culinary level.”

The Forbes Travel Guide 4 Star rated, AAA 4 Diamond rated Viejas Casino & Resort will open a new luxury tower called Willows Hotel & Spa on Thursday, Feb. 1, 2018. The new tower is designed as a resort within a resort, where a holistic approach to the guest experience will be customized to promote wellness. The 159 all-suite tower will be an adults-only, tranquil retreat featuring the finest amenities including a lush new saltwater pool; a luxurious spa, salon, and fitness center; and three new restaurant concepts offering delectable fare.

Votta most recently was the Executive Chef of The MINA Test Kitchen, Chef Mina’s namesake R & D lab, where he developed and tested menus. Previously, he was the Chef de Cuisine at MB Post, Los Angeles’ hot spot under David LeFevre. Votta grew up in Las Vegas where he later attended the University of Nevada, Las Vegas, receiving a bachelor’s in Culinary Arts Management. During his schooling, he worked under Michael Mina at Nobhill and later Bourbon Steak inside the Four Seasons Washington, D.C.

“I am genuinely excited for the next chapter in my career and the opportunity to work alongside such a dynamic team that will take the dining scene at Viejas to a whole new level,” said Votta. “These restaurants will without a doubt change the benchmark for what dining is and will be in tribal casinos moving forward.

Viejas Casino & Resort is at the heart of the Viejas Band of Kumeyaay Indians’ entrepreneurial achievements and is recognized as one of the most respected and successful Indian gaming resorts in California. Since its beginnings as the Viejas Bingo Room in 1977 the property has undergone several expansions, constantly striving to provide guests more amenities, better services and more reasons to visit.