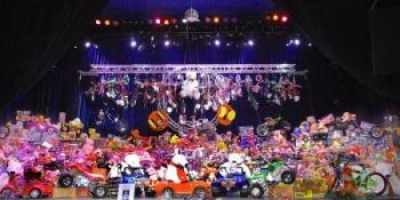 December 12, 2013 (Alpine) – When the curtain went up on stage at the DreamCatcher Lounge last night at Viejas Casino and Resort, it revealed 12,017 toys to benefit local children this holiday season.

Representatives of Viejas Tribal Council also presented a $15,000 check to  East County Salvation Army Captain Terry Masango on behalf of the Viejas Band of Kumeyaay Indians, along with the largest donation of toys ever received by the local Salvation Army chapter. 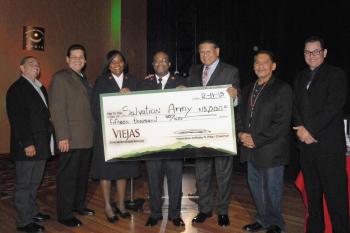 discounts at Viejas Bowl and the Viejas Ice Rink, as well as a gift card in exchange for new, unwrapped toys.

There was a lot of excitement and anticipation during the "Big Reveal" where the curtain was raised in the DreamCatcher at Viejas Casino, all the toys are revealed on stage, and the exact number of toys  raised was announced - 12, 017 toys. It was a new  record and it is believed to be the most toys raised by a single  organization in San Diego County.

Viejas Casino General Manager Chris Kelley said, "This year's goal of  10,000 toys was a bit daunting at first, but when we started seeing  the response from our guests and team members we quickly became very  confident that we could reach the goal. And actually exceeding it by

so much is incredible, and is a testament to the spirit and dedication

of all those involved."