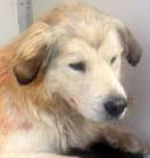 March 1, 2012 (East San Diego County) -- The Viejas Band of Kumeyaay Indians has announced that they are donating $2,500 for the recovery of “Chance,” the dog that was found shot on the Viejas Reservation earlier this month.

Viejas Tribal Chairman Anthony R. Pico said, “We are very proud of the Viejas tribal family member who first discovered Chance on the side of the road and called authorities for help, the Viejas Tribal Firefighter who responded first and provided aid to Chance, as well as the veterinary professionals who saved this dog’s life.” Chairman Pico added, “This shooting goes against everything Viejas stands for and we will do everything we can to make sure Chance eventually gets to a home where he can know the safety, comfort and love that he deserves.”

Viejas Tribal Government has a number of ordinances in place to protect the safety of residents and guests of the Reservation, as well as pets. These include a Peace and Order ordinance, a Firearms ordinance and a Dog Control Ordinance.

At this time, authorities have said they do not have a suspect or motive in the shooting. Viejas has offered its cooperation with the investigation.

About Viejas Band of Kumeyaay Indians
The Viejas Band of Kumeyaay Indians is a sovereign Nation whose people have
inhabited the San Diego County area for thousands of years.
The 1,600 acre Viejas Indian Reservation is located near Alpine, California,
approximately 35 miles east of San Diego. For more information, visit www.viejasbandofkumeyaay.org.