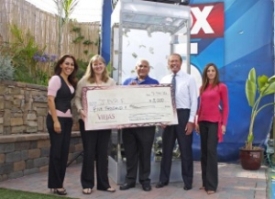 August 3, 2010 (Alpine) --Viejas Casino and Fox 5 San Diego rolled out the Viejas Cash Cube last week to help raise money for San Diego area charities. The event kicked off a month-long “Cool Cash” promotion at the Casino, where over $1,000,000 is up for grabs in August.

Fox 5 Morning News anchors Shally Zomorodi and Paul Bloom, as well as meteorologist Chrissy Russo, each grabbed for cash to raise money for their chosen charities – the local USO, the local Armed Forces YMCA, and the San Diego chapter of the Juvenile Diabetes Research Foundation. Each person had 30 seconds to grab as many $100 bills as possible as the money blew around inside the Cash Cube.

Shally grabbed the most, $5,000, so Viejas offered to match that same amount for each of the charities, bringing the grand total provided to all three charities to $15,000.

Viejas Tribal Chairman Bobby L. Barrett praised the event as “a fun way to kick off a full month of excitement at Viejas Casino, while partnering with Fox 5 to support each of these important charities. JDRF’s work is a good example. The rate of diabetes among Native Americans is more than double the national average, so we greatly appreciate the work that the local JDRF chapter has done and we thank Fox 5 San Diego for helping us support JDRF and other charities in our community.”

During August, guests at Viejas Casino can earn their own chance to enter the Viejas Cash Cube and grab as much cash as they can. Each day through August 31st, guest can earn Cool Cash drawing tickets with slot, bingo and table games play. Cool Cash drawings will be held every Thursday, Saturday and Monday at 7 p.m. and 9 p.m. That’s eight winners a night, 96 winners all month and over $1,000,000 up for grabs in August. For more information on all of Viejas Casino’s promotions in August, including Cool Cash, visit www.viejas.com.