October 14, 2009 (Alpine) – Looking to spice up your week?  Viejas Casino & Outlet Center will host California’s largest BBQ cooking championship again this year in one of East County's most popular free events of the season. The “Smokin’ in the Park” BBQ Championship & Festival (www.viejasbbq.com) is back for its fifth year…bigger and better than ever. This year, more than 60 teams will compete for $23,000 in cash and prizes, making it the largest competition of its kind in the state.

Anew feature this year will be the People’s Choice Award, where event attendees can purchase a sample from various award-winning teams and vote for their favorite. This year’s event has also expanded to include two stages of live entertainment (featuring Los Lobos, The Texas Tornados and many more), multiple beer gardens, a kids play area, vendors, plus all the sights, sounds and smells a barbeque lover can handle. 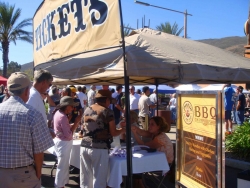 The event takes place from 10 a.m. to 10 p.m. Saturday, October 17 in the Viejas Outlet Center Parking lot, directly across from the Viejas Casino on Willows Road in Alpine. The event and parking are free and open to the public.

The “Smokin’ in the Park” BBQ competition is sanctioned by the Kansas City BBQ Society (KCBS), and the Grand Champion may advance to the 22nd Annual Jack Daniels World Championship Invitational in 2010, in Lynchburg, Tennessee.

Teams competing in the BBQ Championship will be judged in four meaty categories; chicken, pork shoulder, beef brisket and pork spareribs. Cooking begins on Friday night at 10 p.m. and judging begins at noon on Saturday with the winners announced at 4 p.m. Sample barbeque plates will be sold along with People’s Choice sample tickets.

All proceeds will benefit the Alpine School District’s Math and Music Program. The event will also feature appearances from Channel 4’s own backyard cook, Sam the Cooking Guy.

For more information on the event, visit www.viejasbbq.com or call 619-659-2070. And as always, event attendees will get to enjoy savings up to 70% at brand name stores at the Viejas Outlet Center.

i just love eating food, but at the same time its really important to stay fit and healthy. i think Pure Canola is a good option.

That is an awesome idea! I will be bringing this up at our committee meeting tonight
You can find all cooking championships at California culinary schools.

An event where we get to taste BBQ is a not to miss event. It looked like the Smokin in the Park BBQ Championship and Festival had a memorable event. Wish I had the opportunity to attend the event but I'll definitely look forward to be a part of this event this year. I'm all tempted by the Beef Brisket mentioned in the post here. Thanks for the information. I'm sure this year the event will be even more better.
Brickell key condos

Whoa! Seems like a very nice event. Any ideas if they would happen to held another one this 2011? I seriously would want to attend this and bring my family along :)
Thanks in advance for any info!
Ewok of Fat Burning Furnace Review Site

Unfortunately Viejas hasn't had the BBQ championship since 2009.  However in Oct. 2010 Cali Comfort Restaurant in Spring Valley sponsored a BBQ cookoff contest with quite a few BBQ companies and restaurants offering samplings. You may want to contact them and be sure to tell them you heard about them in East County Magazine.

If Viejas ever decides to revive this festival we'll be sure to publish the info in our Festivals of the Month and Calendar sections.