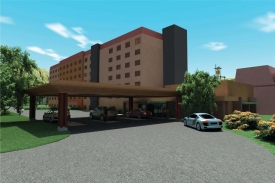 September 23, 2011 (Alpine) – A proposed 150-room hotel adjacent to the Viejas Casino would be “great for our guests and great for the community,” said Viejas public affairs director Robert Scheid at last night’s Alpine Community Planning Group meeting. The $36 million project would generate 450 construction jobs and upon completion, 45 employees at the hotel, said Scheid.

The APCG has no formal authority over the project, which is proposed on tribal lands.  However Viejas reached out voluntarily, with Scheid and several tribal members on hand to answer questions.  The project drew both praise and concerns from planners and audience members present.

“I don’t think there is anybody in this room that would say no to a project that’s going to bring this many jobs to our community,” said one area resident who lives on East Willows Road, who voiced approval for the Casino overall. But he and several others voiced concerns over how much water the hotel might use. “My well is right on the edge of your property. What’s going to happen if my well runs dry?”

Another individual recalled a project at the Barona Resort and Casino, where some neighbors complained of problems with their wells.

Scheid assured those present that there is enough water in the aquifer to support even a larger-scale resort originally considered, before the economic drop resulted in a scaled back plan. “Barona has a different compact,” he noted. “They did not have a water modeling survey.” He added that many tribal members also rely on wells.

A planning board member asked if the tribe could secure water from another source, such as Padre Dam Municipal Water District. Scheid noted that short term, that could be difficult, alluding to litigation Viejas brought against Padre over allegations that the district illegally desecrated a Native American burial ground during excavation for a pumping station site. Long term, however, he indicated the tribe could consider looking into alternative water sources.

Some residents from East and West Willows Road also asked for additional traffic controls if the hotel is built.  By providing casino guests a place to stay overnight, the hotel could potentially result in a net decrease in traffic, Scheid suggested.

The tribe is preparing an environmental impact report and is required to negotiate mitigation with the county if any negative impacts are found.

The hotel, if approved, would be built where the bingo tent and valet parking areas are currently on the east side of the Casino. Groundbreaking is anticipated in the first quarter of 2012, with a grand opening in first quarter 2013.

Viejas offers entertainment, casino gaming and shopping at the Viejas Outlet Mall.  Scheid said the main target for the hotel would be existing casino guests, who have been asking for lodging facilities.  Located just off I-8, the hotel would proide "one of the premier Southern entertainment, gaming and shopping destinations in Southern California," Scheid concluded.