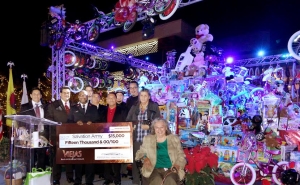 All the toys were gathered up and put on display in grand style poolside at the Viejas Hotel on December 10th, where a party was held and the exact number of toys was revealed to a cheering crowd.

Viejas tribal Government staff, Casino & Resort Team Members and guests spent all of November and most of December donating toys, holding fundraisers, and rallying the community to reach the lofty goal.

Viejas Casino General Manager Chris Kelley said, “We know there’s a huge need for assistance in the community. And it says a lot about the compassion and determination of our Team Members, guests and tribal community when they accept the challenge and exceed the goal. It’s just amazing, and we are proud to help make our community a better place, especially during the holiday season.”

Also at this event, Viejas Community Relations presented Salvation Army Captain Terry Masango with a check for $15,000 on behalf of the Viejas Band of Kumeyaay Indians to support the Army’s efforts in eastern San Diego County.

For more information about Viejas, which operates the four-star Viejas Casino Hotel & Resort as well as the Viejas Outlet Centers in Alpine, visit www.Viejas.com.