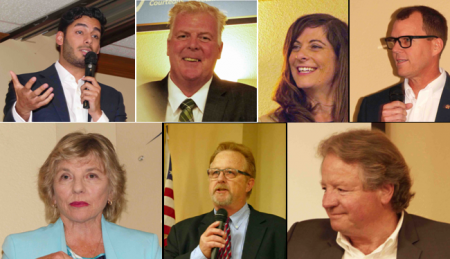 View our videos and post your comments!  Which candidate(s) are strongest and why?  Which might you be most apt to consider voting for, and why?

April 21, 2017 (San Diego’s East County)—Seven Democratic candidates running  for the seat currently held by Republican Duncan Hunter participated in a lively forum last night hosted by the East County Democratic Club.   After opening statements, by each candidate they fielded questions on women’s rights,  healthcare, public education, protecting minorities, digital privacy, as well as their backgrounds, financing and organizing strengths. Many other issues were also addressed by this diverse and articulate array of candidates seeking to represent the 50th Congressional district.

The field includes a former Navy Seal, a farmer, a nurse, an ex-Navy medic, rural planning board members,   a Hispanic and Arab-American activist in the Obama administration, a realtor, a computer data expert, an environmnetalist, and more -- with several candidates having background in multiple fields.

Watch for our detailed analysis of the forum coming later.

We’re posting the videos right away to provide you with unfiltered information.  Please share your views!

The race is drawing national attention since Hunter is under a criminal investigation by the U.S. Justice Department for allegedly spending $60,000 in campaign donations on personal expenses. Hunter has repaid his campaign after media coverage and a Congressional ethics probe was launched.

Below are summaries of the candidates’ backgrounds and experience, listed in alphabetical,

Pierre “Pete” Beauregard:  A Ramona rancher, ex-Navy medic, co-founder of a community medical clinic and former rodeo bull-rider, he also became active in the Occupy movement after the housing market collapse to seek reforms to protect homeowners from predatory lenders.

Josh Butner:  A retired Navy Lieutenant Commander and Gulf War veteran, Butner is currently an elected member of the Jamul-Dulzura School Board. His military experience including service as a Navy Seal, Seal instructor, and medical corpsman. He also runs the military division of Aqua Lung, an underwater dive company that traces its origins to Jacques Cousteau.

Ammar Campa-Najjar served as public affairs officer for the U.S. Department of Labor in the Obama administration.  A native of Sand Diego of Hispanic and Arab descent, he has also served as director of communications and marketing for the U.S. Hispanic Chamber of Commerce, was a White House intern, and worked with nonprofits and his church on issues ranging from helping deported veterans to supporting working people.

Gloria Chadwick:  An elected member of the Grossmont Healthcare District board of directors overseeing Grossmont Hospital, she is a retired registered nurse who worked for many years at the Veterans Administration hospital in San Diego and other medical settings. She is also a talented and internationally acclaimed wildlife artist who speaks on conservation issues.

Hannah Gbeh:  An elected member of the Jamul-Dulzura Community Planning Group, she is also an environmental teacher, consultant and researcher, as well as an organic farmer who serves on the board of the County Farm Bureau. She has worked as a consultant for the U.S. Environmental Protection Agency and as program assistant for the Oglala Sioux tribal government. She also founded a nonprofit that provides food, shelter, clothing and healthcare to the poor and disadvantaged.

Glenn Jensen: Born in La Mesa, Jensen graduated from Helix High, received his economics degree from UCSD.  He says he has a history of political activism fighting for causes including free public education, the environmental, equality and women’s rights. He has also been a lobbyist for consumer access on telecommunications issues and supports net neutrality.  He is currently employed by a major computer corporation, specializing in datacenter consolidation with the Department of Defense.

Patrick Malloy:  A realtor who says he knows the neighborhoods, schools and roads in the 50th Congressional District, Malloy previously ran against Hunter in the 2016 race.  He says he’s running to repair a “do nothing” Congress and rid the district of corruption.