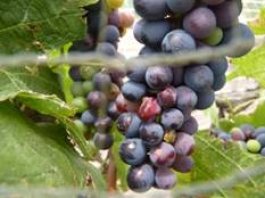 September 1, 2014 (San Diego's East County) - You hear the term, but you don't know what it really means.  Why are some grapes called Bordeaux grapes, if what I drink is from California?  And why are they sometimes called vinifera or Vitis vinifera and why are they connected to each other?  What is a cultivar, or a Bordeaux grape?

Talking about "French varietals" refers to certain wine grapes that evolved in France over a long period of time, maybe 2000 years,and are the grapes that are grown in specific areas in France, and make up the wines of famous regions. You will hear about Bordeaux varietals, Rhone varietals, Burgundy's 2 varietals, or the grapes of Champagne. But you don't usually see French wines called by their grape name the way we do it for wines from the English speaking world or Chile and Argentina. The French for the most part are proud of the fame and quality of the wines of each region, and hope you will take the trouble to learn about them and what grapes are in the different wine regions. You might not like that approach, but remember that these wines are from grapes that evolved as the long term winners over hundreds of years, starting long before Christopher Columbus ever set sail trying not to fall off the edge of the world.  Similarly for a smaller number of famous Italian grapes.

So, what are the Bordeaux varietals?

Two are well known and have found very nice homes in California, Chile, and Australia:  Cabernet Sauvignon and Merlot.  Another is pretty well known now, Malbec, due to having found a great 2nd home in Argentina. A fourth, Cabernet Franc, is known to us in the industry, but not as well known to the general consumer population, because it does not grow as well here as it does in the right hand side of Bordeaux. You will find some Cab Francs in Napa, and now you can also taste some really marvelous ones, in, yep, Ramona. Which is in East County San Diego, not in Europe.  The fifth of the five basic Bordeaux grapes is Petit Verdot. It was and still is a small part of the mix both in Bordeaux and in the great Cabernets of Napa or Sonoma.

But wait, there's more.  Up til around 1870, there were 2 other grapes in the Bordeaux blend,and a third very minor player.  One of this group of three has been resurrected in Chile.  That is Carmenere.  It looks like Merlot, so for a long time the growers in Chile didn't realize that they had a bunch of it mingled in with their excellent Merlot. But it starts growing 1-2 weeks later than Merlot and ripens a little later.  About 20 years ago, using DNA analysis, the grape scientists at UC Davis found that those "late" vines were not a strain or subset of Merlot, but were an entirely different variety.  And now you can find some really good Carmenere wines from Chile, next to their Merlots and Cabs.

There were two others, Saint Macaire and Gros Verdot, which are still very obscure with very few vines grown anywhere.  You have to assume that they either don't taste as good as the others, or are really hard to grow.

So we in California are very proud of our French, Bordeaux - born, Cabs and Merlots.  Napa now rivals Bordeaux, and is the world-wide familiar home of great Cabernet Sauvignon.  Cabs from all the northern California counties, plus Paso Robles, are a staple of American red wine drinking.

Oh, well, what about white Bordeaux?  Is there such a thing?  Yes, and easier to explain, most of it being the white grape Sauvignon blanc.  You might almost think that Sauv blanc is a native grape of New Zealand, given its' popularity from Marlborough NZ.  But it is from Bordeaux.  It is 1/2 of the parentage of the big bad red Cab. Sauvignon.  There are 2 other white grapes in Bordeaux: Semillon, and Muscadelle.  Most of the white dry wines are heavy on Sauv blanc, with smaller percents of the other 2 in the blend.  There is another name to know, though, Sauternes.  Great dessert wines, from mostly Semillon grapes, are another category of famous Bordeaux wines.  Chateau d'Yquem is the Cadillac or Rolls Royce of Sauternes dessert wine.  It is very pricey at $300 or more per bottle although it is affordable compared to the cult prices of some Napa wines..  And to complete the picture, Barsac is a sub-region of Sauterenes, and is mostly dessert wines.

Next up: Rhone varietals, Burgundy, Champagne, then on to Italy, home of more grapes than there are lobbyists in Washingotn D.C.