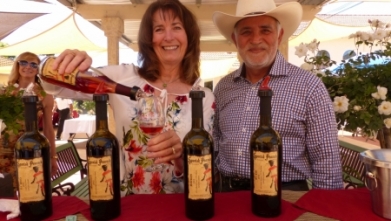 May 14, 2017 (Jamul) – Wineries from along the emerging Highway 94 wine corridor  served up fruits of their labors at the Jamul Wine Festival April 29th at St. St. Pius X Catholic Church in Jamul,  all to benefit building classrooms for local children.  Guests also savored an abundant array of delicious foods,  bid on unique silent auction items,  enjoyed live music, a presentation with wine tasting tips, and more.

“We are excited to have this opportunity to showcase the Vineyards and Wineries in Jamul and to make our Festival the first of many to come,” said Gary Gorton with the Knights Council 9659 at the church. 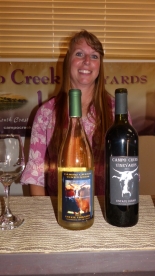 The wines served up included some award-winners, including vintages from Granite Lion Cellars, Campo Creek , Spanish Peacock and Deerhorn Valley Vineyards. The latter has won medals not only in California-based competitions, but also at the international Five Finger Lakes competition in Rochester, New York. Other participating wineries along the 94 corridor include Dulzura Vineyard and Winery, Westfall  Vineyards, Maness Vineyards/Casi Cielo, and Vineyard Hacienda, which is now also a bed and breakfast inn.

Spanish Peacock Winery from Jamul specializes in Old World-style wines and wines reflecting the Californio heritage, offering specialties such as   from a Spanish varietal, or Santa Bella de las Rosas, a Spanish rosé.  You can taste their wines at www.pressboxsportslounge.com in Rancho San Diego or www.Rosestastingroom.com in Old Town.

Manny Melendrez , president of  Spanish Peacock, gave an enlightening talk on how to judge wines by standards such as clarity, hue, brightness and many factors that affect the flavors.  Guests learned how to pair wines with foods, and could also pick up advice on growing grapes.

Melendrez spoke with East County Magazine in a brief video, discussing the inspiration for his wines and how the Spanish Peacock got its name – a heritage dating back to men dressing up in finery at fiestas in  Californio, as the region was known during the Spanish reign.

The festival also i 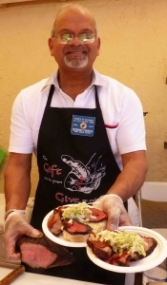 r of the National Wine Council, among others, Gorton noted. 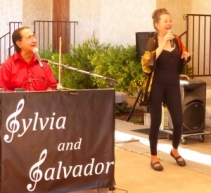 Tastings took place both indoors and on a shaded, outdoor patio, where Sylvia and Salvador provided live music, with keyboard and vocal entertainment.

The silent auction had some special and unique items. Where else could you pick up a Vatican 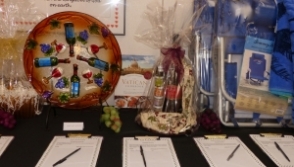 cookbook,  outdoor Spanish beehive fireplace, or hand-craft wine-themed glass bowl?  The bidding was competitive  on these items and more, including a Tommy Bahama beach-themed prize  on which the high bidder was the local parish priest.

A raffle was held, with prizes including wine baskets and a beautiful painting by Gorton’s wife,  Julie Gorton, who also had works for sale to benefit the cause.

An interesting point of note is the increasing artistry of the wine labels themselves from the local wineries participating.  Campo Creek, which also owns a cattle ranch,  has paintings of  cattle and horses adorning their bottles.  Westfall  Vineyards, also in Campo,

has images of vineyards, Spanish Peacock has a Californio man in Spanish garb, Deerhorn Valley labels sport a stag,  while Maness has a cowboy on horseback on its Trailblazer label.

Guests at the event went home with tasting certificates to visit local wineries, as an added bonus at this first-of-its-kind event.  The  church has offered a wine-tasting event before, but this was the first festival—and if you missed it this year, you can attend next year, since organizers are definitely planning on making this an annual event.

Learn more about the Highways of Highway 94 at https://www.thewineriesonhighway94.com/. 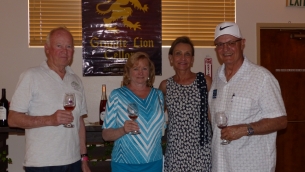