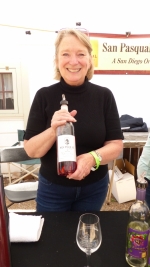 “We have over 20 local wineries from San Diego County here,” Linda McWilliams, winemaker at San Pasqual Winery from La Mesa told East County Magazine.  “Everyone’s having a great time,” she added, serving up samples of award-winning wines from their ever-popular passionfruit to a Malbec chosen to represent California Malbec wines in a French Malbec competition. 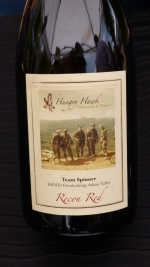 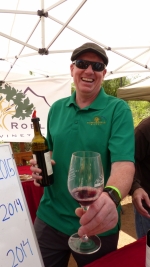 ere plenty of old favorites and some new vintages to savor at the event. Hungry Hawk Winery of Escondido had a delightful Recon Red, aged in French barrels with an artful blend of Grenache, Syrah and Mourvèdre with summer berry flavors and hints of peppers. Its name and label pays homage to Vietnam veterans, says Ed Embly, who is also president of the San Diego County Vintners Association.

The Hart family from Volcan Mountain Winery in Julian served up a Sangiovese wine and more.  Winemaker Jim Hart and his brother, assistant winem 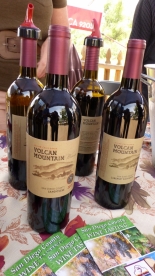 aker Mike Hart, have their roots at the Hart Winery in Temecula.  Their new wines are reaping rewards. Their winery is on the site of an apple orchard in Julian, famed for its Apple Days Festival, so they also make apple wine.

Sierra Roble Winery of Warner Springs served up a Tinto  de Verano rose that was refreshing on this sunny spring day, as well as red and white wines.

Live music by Journey Birds added to the festive ambience amid gardens abloom with spring flowers.

A highlight of the day was a tour of the restored adobe Sikes farmstead home, which was originally built around 1870 but burned in the Cedar Fire. It has since been painstakingly restored.  This was a working farmhouse, unlike other homes of the era found in Old Town. 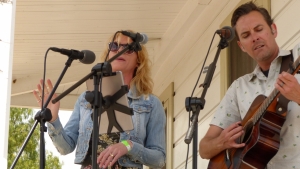 Instead of tasting stations, which couln’t happen at this location due to city permitting restrictions, the Quick 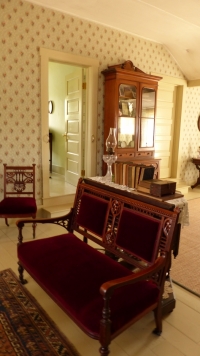 There was also a silent auction, with plenty of gifts for wine lovers and more for visitors to savor. 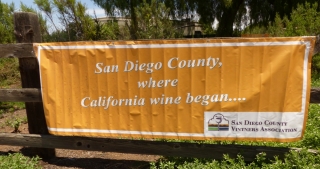 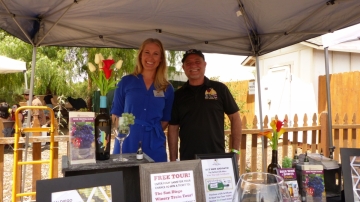