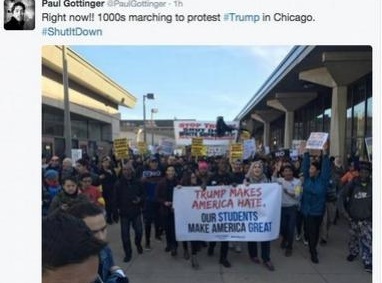 March 12, 2016 (San Diego) — A supporter of Donald Trump has been arrested for punching a black protester in the face at a Trump rally in North Carolina, later stating, “The next time we see him, we might have to kill him,” CNN reports. John McGraw, 78, has been charged with assault, disorderly conduct and making threats.

Critics are voicing alarm at videos of Trump using inflammatory words that arguably are inciting violence at his rallies. The North Carolina assault came just two weeks after Trump said at a rally, “I want to punch him in the face,” after a protester interrupted. Trump also stated that in the past, protesters would be “carried out on stretchers.”

At another rally, Trump told the crowd to “knock the crap” out of anyone throwing a tomato, adding, “I will pay for the legal fees, I promise.” Moreover last fall, when a Black Lives Matter was punched and kicked by audience members at a Trump rally after the protester vocally disrupted the event, Trump said “maybe he should have been roughed up.”

Such language has “energized his followers, who at his rallies have come to resemble professional wrestling match audiences,” writes Joe Gandelman, Editor-in-Chief of The Moderate Voice.  Gandelman contends that Trump “throws red meat to his followers and accentuates hatred.”

Asked if he felt his remarks may have incited the man arrested to commit the crime, Trump stated, “I hope not” and later added he does not condone what happened. He then went on to denigrate protesters as “professional troublemakers,” the Washington Post reports.

Trump’s opponents on both the left and right have denounced his violent rhetoric.

“No one in America should ever fear for their safety at a political rally,” Vermont Senator Bernie Sanders, a Democratic contender in the presidential race, said in a statement released to media. He added, “Mr. Trump should take responsibility for addressing his supporters’ violent actions.” 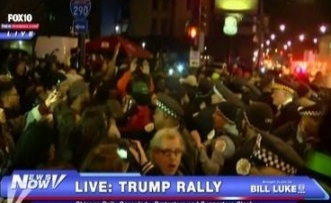 Democrat Hillary Clinton stated in an MSNBC interview that she is “distraught and even appalled” by the growing trend of violence at Trump rallies.  She added that “you don’t make America great by…dumping on everything that made America great, like freedom of speech and assembly and, you know, the right of people to protest.”

Republican candidate John Kasich said Trump has created a”toxic environment” that has allowed his supporters to “come together in violence,” MSNBC reports.  Asked if that toxic atmosphere should disqualify Trump from the presidency, Kasich replied, “I will tell you –he’s getting close to it.”

Florida Senator Marco Rubio also spoke out to denounce Trump. “This is a frightening, grotesque, and disturbing development in American politics,” he said.

Texas Senator Ted Cruz told the New York Times that Trump is responsible for “creating an environment” adding, “When the candidate urges supporters to engage in physical violence, to punch people in the face, the predictable consequence of that is that it escalates.

Ironically, Trump’s heavy-handed tactics may only be emboldening more protesters.

On Friday, a Trump rally in Chicago was cancelled by the campaign after thousands of students from the University of Illinois, joined by MoveOn members and others assembled both outside and inside the rally site. (Some youthful protesters chanted “Bernie” though Sanders has said he does not believe his supporters were “inciting” violence but rather, responding with lawful protest against Trump’s hateful rhetoric. “Donald Trump has got to be loud and clear to his supporters that violence at rallies is not what America is about and he’s got to end it,.” Sanders said.”

MoveOn’s leadership, in an e-mail to members, praised the protesters.  “This is what standing up to hate looks like –and it’s a huge win for courageous student and community organizers who knew they were risking their own safety by taking action,” the e-mail states. “Everywhere Trump goes, his hateful and violence-inciting rhetoric needs to be met with this kind of outpouring of peaceful opposition.”

Columnist and The Moderate Voice managing editor Clarissa Pinkokla Estes has likened the scenario at Trump rallies to the 1968 political conventions where, she recalls, “We saw the senseless injuries, the bloodied bodies and faces of all-protesters, civilians and police officers –and the eventual literal fire storms unleashed across our nation.”

She compares Trump’s calls for violence to segregationist ex-Georgia Governor Lester Maddox publicly urging violence and handing out ax handles to promote violence against children integrating schools in the south, and to former Alabama Governor George Wallace whose inauguruation speech was written by a leader in the the racial hate group, the Ku Klux Klan (Trump, too has drawn KKK-related criticism, included  his reluctance to distance himself from David Duke, leader of the KKK after Duke voiced support for Trump).

Pinkokla denounces “murdering by fiat, by invective, by lack of self control that one would never find in a steady, reasoned person.” She concludes, “Many of us are praying hard—praying that NO ONE BE HARMED” as Trump seemingly condones “violence reprisal for freedom of speech, and violent punishment for persons who have had no trial, no jury, no judge.”