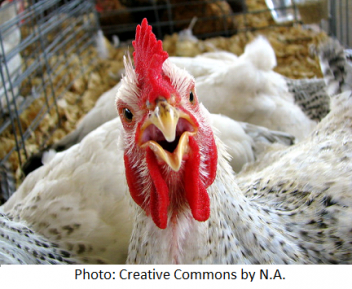 August 31, 2019 (San Diego) – Tonight, the California Department of Food and Agriculture (CDFA) announced on its Virulent Newcastle Disease (VND) page on Facebook that  a new case was confirmed yesterday at a property in central San Diego County.

The CDFA has not yet confirmed the exact location, however multiple East County residents have posted on Facebook that veterinarians have advised them that the new case is in Ramona. Some Ramona residents have also posted that state officials visited this weekend to test their birds, advising them that Newcastle was found at a neighbor’s property.

VND response team members from the CDFA and U.S. Dept. of Agriculture (USDA) “are working though the holiday weekend to establish control measures including restriction of bird movement, mandatory euthanasia of infected and exposed birds, and surveillance testing near the property where infection was detected,” the CDFA announcement states.

Ian Coley posted on the Brush Fire Partyline page: “Yes it’s real, they came to my home today, explained the situation and ended up killing and removing my chickens with my consent, didnt really have a choice. I'm off Griffith Rd between Hanson and Steffy, no I dont know the size of the "kill zone" nor where it started as they would not say.”

Kerri Elaine posted on the Save Our Birds Facebook page that she received  call from a Dr. Cantor confirming the positive test result in Ramona.

In an  e-mail subequently sent to ECM, she provided insights into the ordeal some bird owners may soon face.  She described what she views as heavy-handed tactics and alleged violations of constitutional rights and more when state and federal officials killed her flocks in Riverside County in April. A video of the disturbing incident on YouTube was live-streamed and has received over 200,000 views.

"They slaughtered our healthy pets by snapping necks, snapping legs, shooting guns & shoving alive & half alive birds into trash bags, they can be heard squawking & flopping in bags to escape to safety," she writes. "My 4 minor children can be heard screaming from bedroom windows as they watched in terror. This was done on one of the most Holy days, Good Friday."  She says the week before, 9 people claiming to be CDFA/USDA workers come to her home. "I was told many times they only wanted to test my birds, furthering adding they would not kill anything," she says. Her website includes documentation of other troubling tactics directed toward her family and others. She is seeking legal representation and says repeated raids on her property have left her family living in fear.

An“End Virulent Newcastle Disease” Facebook page has been setup for "fact-based" discussion on the Southern California outbreak and is posting updates.

This is the first case of VND in San Diego County since the current California outbreak began last year.

As of August 23, the USDA has confirmed 449 properties in California infected with VND including sites in San Bernadino, Riverside, Los Angeles, Ventura, and Alameda.  Cases have also been confirmed in Utah and Arizona.  As of June, California had ordered mandatory euthanasia (killing) of 1.2 million domestic birds ranging from chickens, turkey and ducks to pet parrots, pigeons and emus, the Los Angeles Times reports. The disease had seemed to be waning, and it is still too early to know whether the San Diego Newcastle finding affects only a single bird perhaps transported from elsewhere illegally, or a large number of birds infected.

The CDFA urges all bird owners in Southern California to be aware of VND symptoms,  report any sick birds immediately to the Sick Bird Hotline at 866-922-2473  and prevent spread by practicing good biosecurity measures (see below).

According to the USDA, VND has a death rate of nearly 100 percent in unvaccinated flocks. While there is a vaccine, even vaccinated birds may be ordered killed because they can be carriers of the diease.

What to do if you own birds (tips from U.C. Davis, CDFA and USDA)

Do not move birds:  It is prohibited to take any birds out of a quarantine area. In other counties where Newcastle was confirmed, the CDFA has declared the entire counties to be quarantine areas where birds could not be taken in or out until further notice.

Prevent disease through biosecurity:  The disease is spread through feces, secretions, and inhalation.  Wash your hands or use a hand sanitizer and scrub boots before entering and when leaving a poultry area or other bird enclosure.  Use a foot bath with 1 part bleach and 10 parts water to dip bottoms of shoes. Wear disposable coveralls and booties, or change into dedicated clothes and shoes worn only into the poultry area. Also clean and disinfect tires and equipment before moving them off your property. Spray tires with Lysol.  Try to keep wild birds out of the enclosure since they can transmit the disease.

Do not buy new birds during the outbreak as along as your area is quarantined.

Do not buy feed from the owner of a property where Newcastle was found.

Consider vaccinating your birds:  The Lasota or B1 licensed Newscastle vaccine can be purchased at some feed stores or online and is administered via eye drops. However, even vaccinated birds can be carriers capable of spreading the disease and may still be ordered euthanized in an outbreak.

If your birds become ill:  Call the sick bird hotline at 866-922-2473 or humanely euthanize the birds, the CDFA advises, since the longer ill birds are alive, the more the virus reproduces and spreads.

Dispose of dead carcasses: Use double-plastic garbage bags, tightly sealed, placed in the trash. Don’t dump them outdoors where wild animals could drag the carcasses away and spread the virus.  Clear debris so sunlight can heat up infected ground and wait at least 6 months to buy more birds.

VND is not a food safety concern:, Nince no case has ever been transmitted to humans by eating poultry.