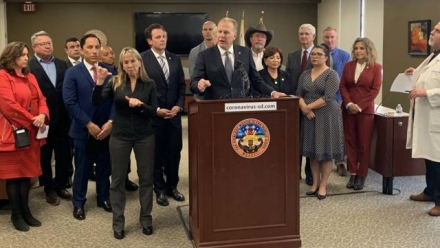 “Today we have multiple new positive cases of COVID-19 to report,” said Supervisor Nathan Fletcher. “The evidence is pointing to the likely reality that we have community spread in San Diego County.”

He announced a legally enforceable public health order banning gatherings of over 250 people beginning at midnight Thursday and continuing through the end of March.

And he said residents aged 65 and older and anyone with a chronic illness should stay home and avoid any gathering.

“We know that this virus is particularly impactful for our senior citizens,” he said. “The risk to generally healthy younger folks remains very low.”

Fletcher was joined by local mayors, health officials and other local leaders at a press conference at the County Administration Building downtown. 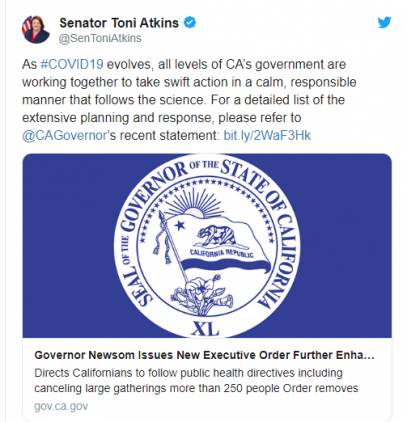 Dr. Wilma Wooten, the county’s public health officer, said there are now six active cases identified by testing at both the county’s laboratory and local hospitals. She said most of those cases are related to travel, but at least one appears to be the result of local community transmission.

“We fully expect that we will get more cases, and yes, we will have deaths,” she said.

Wooten said smaller gatherings can continue but should follow a social distancing guideline of six feet of separation between participants.

Dr. Nick Yphantides, the county’s chief medical officer, said that while community spread is now likely, it remains very limited, and health officials hope it can be contained through the measures announced Thursday.

The five new cases include a woman in her 70s who was aboard the Grand Princess cruise ship and is in home isolation; a man in his 50s with a travel history to Colorado; a man in his 40s with a possible travel history to Colorado who is under investigation; a woman in her 70s — also a passenger on the ship — who was quarantined in Miramar and is now in hospital isolation; and a man in his 50s who is in the hospital in isolation and who public health officials believe may be a community transmission.

Officials at Miramar have reported a sixth new case involving a Marine who visited family in Washington state, where local transmission is already occurring.

To present further community spread, Yphantides put an immediate restriction on visitations to assisted-living homes, and enacted a public health order that employees of those facilities feeling ill must remain home in quarantine.

He said that with 4,200 total hospital beds in the county, cases would be triaged as they arrive. Those over the age of 65 with underlying health conditions or with suppressed immune systems would be treated first. Others might be sent home.

Officials said the county health laboratory now has the capability to test 60 people a day, and has supplies on hand to test 1,200 people.

Despite the ban on large gatherings, the county’s schools remain open for now. 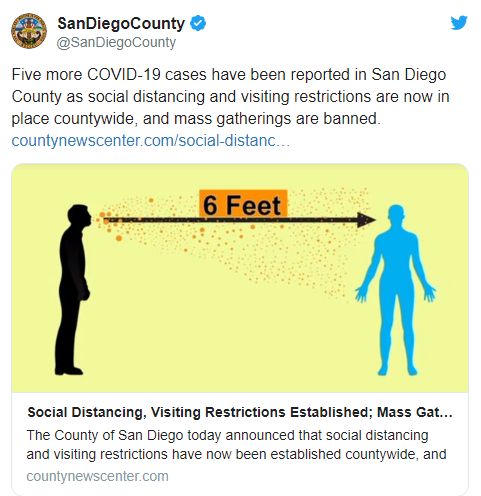 “It’s important to be prepared. We have plans to support our most vulnerable students,” said San Diego Unified School District Superintendent Cindy Marten, adding that “all decisions are made in concert with our public health agencies.”