highlights accomplishments, but results are apparent in a stroll down Main Street

“This is proof that there is an economic engine running in downtown. These businesses have chosen to invest in downtown El Cajon.” –Cindi Fargo, president and CEO, El Cajon Community Development Corporation

t Namo hands an armful of tuxedos to a groom’s brother. His wife, Janet, takes measurements for another client while a

group of girls browse through racks of elegant gowns.

The Namos, who are Chaldeans from Iraq, are among El Cajon’s many immigrants and refugees now opening up businesses—and helping to contribute to the local economy. Their shop on Main Street, still sporting a “coming soon” sign, is bustling—and it’s not alone.

Down the block, Yenia Castro shampoos a cliient’s hair inside her new salon, Visual Dreams, which has been extensively remodeled. She praises the ECCDC. "They helped me to promote my business," she said.

Next door, the Main Street 5 Gallery has opened up in the back of Glamour Girlz Boutique.

A couple of doors down, a workman applies a fresh coat of paint at Arsenal Mixed Martial Arts, which will be opening in February.

“I grew up in El Cajon,” says Mark Olsen, one of three owners, along with Alan Barrientos and Scott Ortiz. “This is a great place, downtown El Cajon.” Soon, passersby will be able to watch martial arts demonstrations through the windows on Main Street.

Serenity House, also on Main, celebrates its grand opening this Saturday from 12 to 2 p.m.

“We’ll have Middle Eastern deserts—and we will have the president of the Evangelical Church of Egypt,” says Hany Iskandar, the manager. He is Egyptian, as is owner Zohny Hanna, an international musical producer and film director.

A Christian book and music store, Serenity House also sells gifts, snacks, and plans to add coffee service. Shelves display items from the Holy land—soil from Bethlehem, water from the Jordan River, incense, myrrh, and balm of Gilead. The store also offers classes in English and orientations to the community for newcomers from the Middle East, adds Iskander.

These are among a dozen new businesses that have opened in downtown El Cajon in the past 18 months. Another dozen or so more are coming soon. Among them are several restaurants and a brewery that aim to bring in night life to downtown El Cajon. El Cajon Brewery & Steakhouse, the Mona Lisa Restaurant & Banquet Room, Samoon Bakery & Restaurant, Santana’s Restaurant, Happy’s Pizza, and Kip’s Chinese Restaurant are among the new eateries soon to open.

Another popular restaurant, Downtown Café, just expanded its space and now offers live music in a brick-lined room with wrought-iron rails that evokes El Cajon’s roots nearly a century ago. (The City will celebrate its centennial in 2012). This month’s entertainment includes an eclectic range: Blues jam, Good Mojo, the Kemosabe Band, Noise Boys, plus Indian Joe & the Chiefs.

Just a couple of years ago, downtown had seemingly more boarded up storefronts than businesses. While there are still some vacancies (notably the Salvation Army building, which lacks parking and needs seismic retrofitting), progress can definitely be seen—and measured by a line of cars streaming into El Cajon’s downtown business district after dark.

“We have important tools in our toolkit. One of the biggest is the specific plan and direction from the City Council,” said Cindi Fargo, the dynamic new president and CEO of the ECCCD. “They’ve made it clear that priorities include a dining district, a retail atmosphere, arts and culture.”

With Fargo at the helm, the ECCCD completed a retail development strategy that included a market analysis and identified retail clusters already in the district. “Based on the analysis, prospective business categories were identified that are suitable and likely to be successful in downtown,” Fargo noted. “We are going out and recruiting niche retail, a coffeehouse, additional restaurants, mercantile, arts and cultural activities.” She would like to see a wine bar, a bike shop, and more.

Recruitment has been “much more active than we’ve ever been before,” said Fargo, who says it takes 60 contacts on average to bring in one new business to a city. “This year, we worked with the City to restructure grants, so the money is tied to specific retail and restaurant recruitment.” Instead of landlords renting to any business that will pay the rent, building owners now have a “carrot” in the form of financial incentives that include helping to pay for façade improvements or interior remodeling.

Some large buildings may be encouraged to break up interiors into several smaller spaces, a move that provides more stability for owners—since if one business fails, there are still several others to cover rent costs. 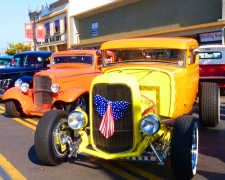 El Cajon’s downtown was once a vital core of East County—with Old Highway 80 (now Main Street) the main artery for traffic in the region. But then Interstate 8 was built, along with the Parkway Plaza shopping mall, and urban decay set in.

“There was a time when everybody fled to the mall, and now we’re on the road to recovery,” Fargo predicted. She praised Mayor Mark Lewis and Council for being “very supportive”, though added that she hopes to see Council ultimately reopen the East County Performing Arts Center, which is currently closed.

Cole Davis, manager of resource development, marketing and promotions, views downtown’s character as its strength. “It’s not a generic strip mall. We really are a valley of opportunity—as it was 100 years ago.”

Davis has been activ

ely working to retool popular events –and add some new ones. “We put on great events that bring in hundreds of thousands of people,” he said, citing Concerts on the Green and Classic Cruise nights as examples. “But people were coming, enjoying events and leaving. We’ve had great holiday events, but the question is how do we get people off the Holly Jolly Trolley and into the stores?”

So this holiday season, shoppers downtown received a passport. At each store where visitors shopped, they could receive stamps on their passport and enter a drawing for $13,000 in prizes.

“We provided lights to downtown merchants,” Fargo said of the ECCDC’s efforts to encourage holiday decorating downtown. “Cole hung most of them.”

Davis added, “We had almost 30 decorated this year. The grand prize winner spent around $3,500 on lights.” The City provided $5,000 to help with the successful promotion.

The ECCDC has also started a cooperative advertising program to support local merchants and added a new virtual tour on its website (www.downtownelcajon.com).

The ECCDC itself was the target of criticism last year, after audit reports showed financial irregularities. Those occurred prior to Fargo joining the organization. The City Council threatened to yank funding, but has since approved funds for a full year, Fargo said. “We’re documenting programming a lot more,” she added. “We share a common goal—bring back the heart of the community—and I think we’re a lot closer to that.”

Fargo, who started her career as an intern in the Gaslamp district in downtown San Diego, a community which has undergone its own dramatic renaissance, says that “downtown revitalization is a science.”

A key factor to success is neighborhood improvement, she believes. “One important thing is the needs of the locals. “Per capita income within one mile of downtown is just $16,000,” Fargo observed. Within three miles of El Cajon’s heart, income rises to $38,000, then to $50,000 within five miles of downtown.

Fargo wants to start “victory gardens and community gardens and a farm to table program, so residents can participate, generate income, and sell foods to local restaurants,” she said. She also hopes to add a farmer’s market where people at all levels of income can participate.

In addition, she hopes to re-envigorate the International Women’s Kitchen concept. In years past, the CDC ran such a program, but later closed it. Now Fargo wants to see a revamped program provide artisan baked goods cooked up by local residents. “When household income increase, it helps merchants,” she noted.

Urban improvement to maximize safety and cleanliness are also important goals, said Fargo. Bob Hutton, a former police chief in Coronado, now heads up the City’s program that has removed 2,600 square feet of graffiti over the past year.

A recent Union-Tribune news article noted that El Cajon was the butt of a joke on a TV sitcom, which used an unflattering anatomical term to refer to the region. 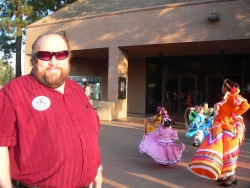 But the community does have attractions, including more affordable retail spaces and housing than many other areas in San Diego County. El Cajon also draws residents from the backcountry, who come to downtown to shop. The civic center, including the courthouse, the theater (dark for now), and Council headquarters also bring people downtown.

Few communities, if any, have undergone the dramatic change that El Cajon has seen recently. Once a sleepy Western town, the city is now home to more Iraqi Chaldeans than any other city in America—as well as immigrants and refugees from many other parts of the world. 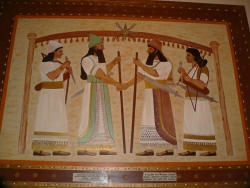 “We are seeing the Chaldeans very active. They are investing in the kinds of business that reflect their heritage—jewelry stores, bakeries, restaurants,” Fargo said.

The ECCDC is planning a signature event called Cajon Fest that will showcase the cajon box, a drum, along with celebrating a wealth of international cultures now found in El Cajon.

“Twenty-seven languages are spoken in El Cajon,”noted Fargo, who believes the community is continuing to evolve and develop its cultural identity. “World village, home town – that’s the brand that we want to develop for downtown. People are intensely proud of El Cajon as their home town, and they want to retain a comfortable scale. But we are also developing as a world village--so we can celebrate diversity and inclusivity, while holding onto our American values.”