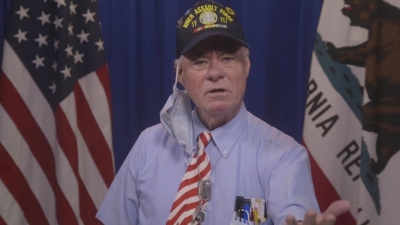 John Russo, who said he came from a military family, wrote, “I do not respect your attempt to analogize the mob violence that desecrated our Capitol last week in an attempt to intimidate the Congress of the United States to the actions of the Founders of this nation. The Founders would have been horrified by what happened last week, and would have dealt sternly with those who participated in as well as those who incited—an attack on the republican and democratic form of government that the Revolutionary War generation left us as a legacy.”  Russo then called on Voepel to resign.

While as of today no one on Voepel’s Facebook page overtly defended his remarks, some deflected by blaming Democrats for not being forceful enough in condemning other violence. A poster calling himself VivEric Rader wrote, “And democrats need to repent of their entire 2020 hypocritical year of never condemning cops being murdered, assaulted, buildings burned, and encouraging rioters. Without repentance they have no place to judge and are hypocritical tyrants.” (In fact, some Democrats did condemn rioting and other violence, though not all.)

The Truman National Security Project has sent a letter to the state Assembly calling for Voepel to be expelled.  The group, founded after 9/11 to advocate for tough, smart national security solutions” includes veterans, civilians, policy experts and political professionals. Their letter calls Voepel’s words “an explicit glorification of the insurrection and direct incitement of further violence.  Assemblymember Voepel is both an elected official and a veteran of the U.S. military. We believe that he has violated his sworn oath and must be held accountable.”

Voepel later tried to walk-back his statements, posting on Facebook, “I do not condone or support the violence and lawlessness that took place on Wednesday, January 6th, at our nation’s capital. The loss of life, theft of government property, and blatant disregard for law and order is reprehensible and unnecessary, and I offer my condolences and prayers for the families reeling from the recent loss of their loved ones.” But he added that the actions reflect “the deep division currently facing our nation. That is why it is especially important that each of us work extra hard to heal the divisions between us.”

Voepel has previously drawn criticisms of alleged “stolen valor” or falsely claiming to have earned military medals that in some cases were not backed up by military records. He was also exposed boasting on tape at the Capitol of military exploits that did not occur, falsely claiming to have been in a boat in a jungle with an elite force in Vietnam, when in fact Voepel was a sailor stationed offshore.

Given his history of lying about his military service, his statements about what he 'meant' are even less believable (and it wasn't even slightly credible to begin with), plus the story of the office chat with the young woman is disgusting, though that story isn't new to me. I'll give him credit, and assume he's delusional, not a traitor. In either case, he doesn't belong in any position of authority. The saddest part is that the people of this district voted him in. That's on us, and I'll be writing to his chamber leadership to requesting his expulsion. I'm not someone who could get elected in this district, and I don't think I'd make a good legislator, but will someone not delusional, and less degrading to the district please run on the Republican side? (Given that we aren't likely to elect a Democrat even when the opponent is this as bad as this guy is)
the gop is now known as the retrumplican party
...given the ilk of politicians routinely elected in East County.
Cunningham (bribery), Duncan Sr. (Rubber checks), Duncan Jr. (Campaign finance fraud, adultery, then throws wife under the bus), and now Voepel who makes them look pretty good. Republicans, are you questioning your judgement yet?