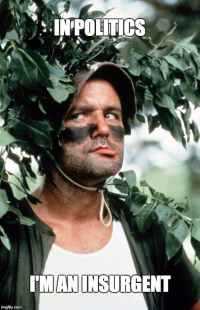 Photo from www.StopRandyVoepel.com, a site criticizing Voepel's  "insurgent" remarks suggesting he would be a political  hit man for the GOP in Sacramento

May 27, 2016 (San Diego’s East County) – Santee Mayor Randy Voepel is facing some formidable opposition in his run for the 71st Assembly seat.  An anonymous hit site, www.StopRandyVoepel.com, has posted audio of inflammatory statements made by Voepel—along with past tax lien documents on the self-proclaimed fiscal conservative’s home.

Meanwhile his opponent, Tony Teora, a centrist Republican who leans Libertarian on some issues but green on climate change, has invested heavily in his campaign including freeway signs, newspaper ads and newsletters to voters.  (Leo Hamel, a third candidate listed on the ballot, has withdrawn from the race.)

“The big difference between Randy and I, is that Randy wants to go to Sacramento and just vote conservative; I want to go to Sacramento and fight to create smart legislation (or rescind laws) to change people’s lives for the better,” Teora told ECM in an email  this week. “A lot of that will be Libertarian and Conservative based legislation, but a lot will be whatever is smart to help the people of this state.”

He adds, “ Also a BIG mistake of the party is lying to people about climate change. We need to be pro-active on that front, or millions will die,” says Teora, an electrical engineer, software company founder, data solutions manager for a bank and science fiction author.  Teora’s goals if elected also include lowering taxes on businesses and families while supporting education; his endorsements include the California Faculty Association.

The StopRandyVoepel site includes audio of Voepel, a former  Marine and Viet Nam Veteran, speaking to a conservative group locally in which he describes himself as an ”insurgent” running solely to identify the weakest Democrat in the Assembly and use his second year in office to work toward knocking out that official. “I’m talking sniper politics …the best hit is when they get killed and they don’t even know who did it.  So in politics, I’m an insurgent,” Voepel stated.

The  site’s operator has posted blog entires blasting Voepel for planning to “do nothing for the first year of his term” and not addressing needs of constituents in the district such as high taxes, unemployment, and drought impacts.  “I want someone in the State Assembly who will represent the interests of me and my neighbors. Not play war games,” the blog states.  The blogger also criticized Voepel’s punitive actions toward the homeless in Santee, stating,”We need a war on homelessness, not a war on the homeless.”

The anti-Voepel site also attacks Voepel  for boasting about Santee getting an “F” grade from theAmerican Lung Association for its pro-smoking ordinances. “Our brave hero can now add the fight FOR lung cancer to his battles…” the site snipes.

The site also faults Voepel for responding to an autograph collector from China with a written rebuff that read in part, “I respectfully decline to cooperate in any way with what I consider to be an enemy of the United States. The People’s Republic of China is a repressive and evil communist regime,” he went on. The blog poster cited concerns over Voepel’s inability to separate individuals from their government.

What does Teora think of wind and solar farms?

Excerpt from story on our interview with him last year: http://www.eastcountymagazine.org/teora-announces-assembly-run-seeks-%E2...

Teora wants to introduce legislation that would empower local citizens to vote for—or keep projects out-- of their communities, such as the proposed Lakeside sand mine or industrial wind projects in rural areas. He faults special interests for buying votes and “taking away local control. We need people in the Legislature who won’t be strong-armed… I would support legislation for a Restore Local Control Bill….I think a local board should be able to veto; if they don’t want something, that should be final.”

He adds, “We’re destroying our environment and this is not sustainable,” citing industrial wind and solar as examples. He wants to support solar on rooftops instead.

He says it’s “crazy” to believe that there is no such thing as climate change. “Something like 99% of the scientists who look at the weather tell you we have a problem..These people are doing a disservice to their constituents by proposing that there is no global warming.”

Also note: We are interviewing him again and that interview is set to air Friday on KNSJ.

(Voepel campaign: if anyone is reading this, Randy is still welcome to do an interview.  We've ask multiple times in recent weeks/months and received no response.)

Randy Voepel talks like he's nuts. I’ve heard he’s also treated constituents poorly, even times in a rude and unprofessional manner. I'm saddened to see this is the best I get to run against, but I admit it gives me more inspiration (and good chances) to get elected. Red Ink Randy talks about being a fiscal conservative, but I find that hard to believe as his campaign is broke. (I was told his campaign is in debt, and I checked, it’s true--he's over $8,000 in the RED.) His campaign from a financial standpoint is currently bankrupt. He owes vendors money he does not have in his campaign account. When I see online an old IRS tax lien on personal property, it’s reminds me of the saying: “It’s not what you say, it’s what you do.” The TEORA campaign spends no more than it receives. Fiscal responsibility is something we need in Sacramento. We also need someone who cares about the people and not special interests. Please vote for me in June and November. Tony Teora www.tonyteora.org