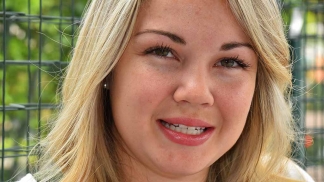 Photo:  Rebekah Basson, 25, was appointed to the La Mesa-Spring Valley school board in August. Photo by Ken Stone

November 1, 2017 (La Mesa) - La Mesa’s new school board member voted in Georgia’s November 2016 election despite later swearing that she had been a resident of the East County district for 1 1/2 years — going back to about January 2016.

The San Diego native lived in Georgia from age 12 to about three years ago, when she enrolled in a Murrieta Bible college.

“Her problem is she’s voting [in Georgia] quite a long time after saying she moved to California,” said David Lublin, an elections expert at American University in Washington, D.C.

“That’s a real problem,” said the Harvard Ph.D. “You shouldn’t be voting in a state where you do not live. … She has voted illegally though she’s no longer a resident of the Peach State.”

According to the Georgia Secretary of State’s Office, Basson was mailed an absentee ballot for the November 2016 election. It was sent to 350 Cypress Lane, El Cajon, the address of her employer — Foothills Christian Church.

It wasn’t until Aug. 7 — four days after La Mesa schools Superintendent Brian Marshall swore in Basson as a school board member — that her Georgia voter registration was changed to inactive, said Tina Lunsford, a Henry County elections official.

“A confirmation was returned undeliverable,” Lunsford told Times of San Diego on Oct. 17.

Republican Basson, who registered to vote in San Diego County on July 25, did not respond to repeated requests for comment. Neither did schools chief Marshall.

(In a lone September interview, Basson said she mistakenly assumed she was registering to vote when she applied for a California driver’s license; she checked a box to update her registration records, but it didn’t apply to Georgia.)

James Gardner, a state constitutional law professor at University at Buffalo School of Law in New York, said the key question is not where Basson lives but what her legal “domicile” is.

“Residence is where you live at a particular point in time,” Gardner said via email. “But domicile is generally understood to mean something more substantial, like a person’s permanent residence.”

Thus college students who attend schools out-of-state or members of the military or State Department can vote absentee in their “home” state while living elsewhere.

“However, determination of domicile for purposes of voting eligibility is not purely a matter of subjective intent; evidence of that intention is relevant,” Gardner said.

“The kind of evidence administrators and courts typically look at includes the state in which the person hold a driver’s license, where they have a bank account, where they own residential property, and other evidence that sheds light on whether their current residence is temporary or permanent.”

As of last Wednesday, Oct. 25, Basson’s Georgia driver’s license was “currently valid,” said the Georgia Department of Driver Services — its version of the DMV.

But the California DMV said it issued a driver’s license to Basson on June 5 of this year. The DMV says “you must apply for a California driver license within 10 days of establishing residency in the state.”

That gave pause to Gardner, the Bridget and Thomas Black distinguished professor at State University of New York.

“From the facts you provide,” he said, “it seems that regardless of her eligibility to vote in one place or another, she may be asserting simultaneously to be domiciled in two places, which is not legally possible. No one can have more than one domicile at a time for purposes of voting.”

Lublin, the government professor in Washington, suggested checking where she filed her state income taxes.

But William Gaston, a spokesman for the Georgia Department of Revenue, said: “Any information regarding the filing of taxes is confidential and may not be released.”

In a phone interview Monday, Lublin said he wasn’t surprised that Basson’s Georgia voter registration persisted because “the interstate purging system is not so great.”

Lublin added: “What’s interesting here is that Republicans have become increasingly convinced … that Democrats are committing voter fraud. And here you have a case of someone who’s a Republican perpetrating voter fraud within a Republican state that claims to have clamped down on this through the adoption of … voter-identification laws.”

According to her LinkedIn profile, Basson (then Rebekah Winfree) attended Calvary Chapel Bible College from 2014 to 2016, when she graduated with a theology and biblical studies degree.

“She’s got a real problem,” Lublin said. “What seems to be the reality is that she was a resident of California since at least when her education ended, if not before that.”

Basson moved to La Mesa around January 2016, her school-board application suggests, so she would have been a California resident for at least 17 months when she got her California driver’s license. (She also signaled her intention to be a permanent resident by promising to run for school board next year.)

Under Georgia law, “Any person who votes or attempts to vote by absentee ballot at any primary or election … who knows that he or she is not qualified to vote shall be guilty of a felony and, upon conviction thereof, shall be sentenced to imprisonment for not less than one nor more than 10 years or to pay a fine not to exceed $100,000.00, or both.”

Michael Vu, San Diego County’s registrar of voters, deferred to the District Attorney’s Office “on their assessment of the [Basson] situation.”

“As you may know,” Vu wrote late Monday night, “the ROV’s responsibilities are ministerial in nature and as a result does not opine on whether the situation raises questions of voter fraud.”

Tanya Sierra, a spokeswoman for the DA’s office, said: “For our part, we can’t answer your questions because it is akin to giving legal advice, which we are prohibited from doing.”

Lublin had a hard time thinking of an innocent explanation for Basson’s voting behavior.

“This is not an accident — not an oopsy-daisy,” he said.

It doesn’t matter, that just serves to keep the wedge in place.

Must be a republican, am I right?