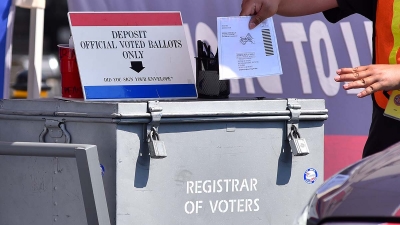 May 19, 2022 (San Diego) - The ballot for the June 7 primary election in San Diego County is short, with several important local races not requiring a primary or even uncontested and therefore not on the ballot.

The contested, high-profile races include those for Attorney General, state Controller, San Diego County Sheriff and Mayor of Chula Vista.

Among the races you won’t see are District Attorney, where incumbent Summer Stephan is unopposed, and three other county races where there are just two candidates: Supervisor in District 5, Treasurer-Tax Collector and Assessor/Recorder/Clerk.

It will be the third statewide election taking place under post-COVID changes. That means every registered voter should already have a mail ballot, and in-person voting is limited to voter centers, many of which will open as early as May 28.

Unlike primaries in many other states, where Donald Trump has weighed in with endorsements, the former president has ignored candidates in America’s most populous state.

He faces 25 challengers, only one of whom, Republican state Sen. Brian Dahle, a farmer from Lassen County in the far north, is well known politically. Others on the ballot include Republican Jenny Rae Le Roux, a management consultant and entrepreneur who lives on a farm in Redding, and Michael Shellenberger, a conservative independent who advocates mandatory drug treatment for the homeless.

Democratic incumbents in most of the other state offices face only token Republican challengers. That includes Lt. Governor Eleni Kounalakis, Secretary of State Shirley Weber from San Diego and Treasurer Fiona Ma.

In two races, Controller and Insurance Commissioner, the battle is between Democrats. In the first, incumbent Insurance Commissioner Ricardo Lara faces Assemblyman Marc Levine from Marin County. Levine accuses Lara of being too cozy with the industry he regulates, while Lara counters he has forced insurers to continue coverage after devastating wildfires.

The second is for Controller. Among the contenders are state Sen. Steve Glazer from the Bay Area, Los Angeles City Controller Ron Galperin, State Board of Equalization Chair Malia Cohen and former Montery Park Mayor Yvonne Yiu, who has outspent everyone in the race.

Glazer is promoting his legislature experience, while Galperin stresses his work as controller of the state’s largest city, Cohen her Democratic Party endorsement and Yiu her experience in business and finance. There is one Republican on the ballot, Stanford University lecturer and CNN commentator Lanhee Chen.

If you like the job that appointed Sen. Alex Padilla is doing, you can vote for him twice — once to fill the remaining term of Kamala Harris, whom he was appointed to succeed, and again for a full six-year term starting Jan. 3, 2023.  Newsom appointed then Secretary of State Padilla in January 2021 as Harris became Vice President, but June 7 is the first general statewide election since then. Padilla, an MIT-trained engineer who turned to politics, has a number of challengers for both votes, notably activist Republican attorney Mark Meuser.

For many San Diego County voters, the biggest difference on the ballot will be the names listed for U.S. Representative. Thanks to redistricting after the 2020 Census, many voters will find different incumbents.

Rep. Mike Levin, a Democrat, is seeking a third term in the 49th District. The district stretches into historically Republican Orange County, and that party is seeking to win it back. So the real battle is over who will face Levin in November.

The same is true for Rep. Darrell Issa, the local delegation’s only Republican, in the 48th District in East County.

The sprawling new 18th District stretches from Chula Vista along the border through Imperial County and then in a counter-clockwise arc through parts of Riverside and San Bernardino counties. Chula Vista City Councilman and Coastal Commission Chair Steve Padilla is facing only token Republican opposition in his first bid for a state elected office.

In the 32nd District, which stretches from Julian and Borrego Springs into Riverside and parts of Orange County, Republican Assemblymember Kelly Seyarto is seeking to move up to the Senate. After a career as a firefighter, Seyarto entered politics in Murietta, becoming Mayor of the fast growing city.

Encinitas Mayor Catherine Blakespear is seeking her first state office in the 38th District, which stretches along the coast from Mission Bay into south Orange County. Blakespear has been active in environmental and transportation causes and is currently chair of SANDAG. She faces Republican political newcomer Matt Gunderson, who owns auto dealerships in Orange County.

In the 40th District, which covers much of east and north county, Sen. Brian Jones is running for a second term. Jones, a Republican from Santee, faces Democrat Joseph Rocha, whose earlier challenge to Rep. Darrel Issa was thwarted by redistricting.

Democratic incumbents Tasha Boerner Horvath in the 77th District, Chris Ward in the 78th District and newly elected Akilah Weber in the 79th District face only token opposition. But Republican vs. Republican battles are noteworthy in the 75th and 76th districts.

Redistricting put incumbents Marie Waldron and Randy Voepel in the same district, the 75th, with only token Democratic opposition.  Waldon is a business owner from Escondido and the former Republican leader in the Assembly.  Voepel is a Navy veteran and long-time conservative voice from Santee.

In the 76th District, the contest is between Republican political newcomers June Cutter and Kristie Bruce-Lane to make the general election runoff with Democratic incumbent Brian Maienschein, himself a former Republican who switched parties during the Donald Trump presidency.

The situation in the 80 District is similar to that involving Sen. Alex Padilla. Former San Diego City Councilmembers David Alvarez and Georgette Gómez are in a runoff for the remaining term of Lorena Gonzalez, who resigned in January.  They’re also facing off along with other candidates for the full term.  This is a contest between different Democratic Party futures in the South Bay district, with Gómez representing the party’s progressive wing and Alvarez the more traditional positions of the party.

There are three Superior Court judicial positions on the ballot. For Office 32, Pennie K. McLaughlin, a court commissioner, is rated “exceptionally well qualified” by the San Diego County Bar Association and is running unopposed.

Superintended of Public Instruction Tony K. Thurmond, an educator and former school board trustee from the Bay Area, is seeking a second term in the officially nonpartisan office and facing only token opposition.

Political newcomer Shana Hazan has received widespread support in her campaign to represent District B. Hazan is a former teacher and nonprofit executive who serves on the California First 5 Commission.

Supervisor Nathan Fletcher, who was the face of the county’s response to the coronavirus pandemic and chairs the Board of Supervisors, is up for re-election in District 4. Fletcher is a Marine combat veteran and former state Assemblyman. The position is nonpartisan, but Fletcher is a Democrat. He faces Republican opposition on the right from Amy Reichert, whose organization ReOpen San Diego fought efforts to contain the virus.

Undersheriff Kelly Martinez, the second in command at the San Diego Sheriff’s Department, has the backing of former three-term Sheriff Bill Gore as well as much of the political establishment, including four of the five county Supervisors. If elected, she would be the county’s first female sheriff.

The leading challenger is retired sheriff’s commander Dave Myers, who ran unsuccessfully in 2018, but is endorsed by the San Diego County Democratic Party and five members of the San Diego City Council. Myers is running on a platform of change at the department, which has been criticized for an unusually high numbers of deaths of prisoners in custody.

Incumbent City Council members Jen Campbell, Monica Montgomery-Steppe and Vivian Moreno are up for re-election in Districts 2, 4 and 8, but only in Campbell’s case is there anything but token opposition.

Campbell, a physician who is backed by Mayor Todd Gloria and much of the Democratic Party establishment, has been under fire from community activists for her efforts to find a compromise on short-term rentals and her support for redeveloping the dilapidated Midway District. Leading the opposition are former Assemblymember Lori Saldaña and UCSD professor Joel Day.

The District 6 seat is open, with former radio personally and environmental activist Tommy Hough and nonprofit director Kent Lee vying to succeed Chris Cate.  Hough, who serves as a county planning commissioner, has been actively campaigning for the position for several years.

Perhaps the race most crowded with high-profile candidates is that for mayor of the county’s second largest city. Chula Vista may play second fiddle to San Diego, but the South Bay city boasts the same population as Buffalo and is almost as big as St. Louis.

Two of these candidates will face each other in an equally high profile runoff in the November general election.