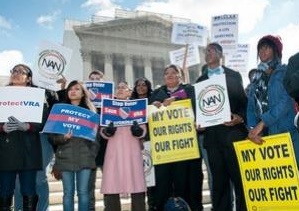 April 5, 2016 (Washington D.C.) — The U.S. Supreme Court handed a victory to civil rights activists and a loss to conservative challengers, upholding a key provision of the U.S. Voting Rights Act by a unanimous 8 to 0 vote.

The court rejected arguments by conservatives from Texas who claimed their votes were diluted by other districts that had equal population, but fewer voters.  Those plaintiffs had argued that states should be allowed to draw up districts based on the number of registered or eligible voters.

Had the ruling gone the other way, it could have shifted legislative power from densely populated urban areas to less populated rural places.  The decision also has an impact in areas such as San Diego and El Cajon, communities with large immigrant and refugee populations, but many are not registered to vote.

Common Cause national redistricting director Kathay Feng states in a press release, “We don’t deny children police protection because they are not registered to vote, so why would we deny fair representation based on who is registered and who is not?”

Common Cause president Miles Rapoport praised the decision as affirming “one of our most fundamental values as  Americans: that every person counts.” He adds, “We now turn our attention to the states to monitor and combat any effort to deprive millions of young people, non-citizen residents, and other non-voters of constitutional protections.”

Locally, San Diego Assemblywoman Lorena Gonzalez issued this statement.  “Since my election to the Assembly, I have always my constitutional duty is to represent every single resident of my district – regardless of their age, immigration status, or even incarceration status – and I strive to fulfill that responsibility every day. While we continue working to remove barriers to voting, encourage stronger electoral participation among all eligible voters, and make elected officials more accountable, the Supreme Court’s unanimous decision today reminds all elected officials that they have the duty to represent everyone who resides in their districts.”

In the court’s opinion, Justice Ruth Bader Ginsburg wrote, “History, our decisions, and settled practice in all 50 states and countless local jurisdictions point in the same direction: total-population apportionment meets the Equal Protection demand, by rendering each representative alert to the interest and constituent-service requests of all who dwell in the representative’s district.”

The high court’s action came immediately after an investigation was launched into alleged Voting Rights Act violations in Arizona, where voters waited hours in line because the number of polling places were cut.  Critics of Arizona’s actions noted that such changes could not have occurred before another recent Supreme Court ruling that weakened other portions of the Voting Rights Act that previously prohibited states with a history of discrimination from making changes to their voting procedures without federal approval.   The U.S. Justice Department has just announced that it will investigate Arizona’s actions in the presidential primary election.

Some have speculated that the high court, stung by criticisms of that ruling, may have been influenced to issue the unanimous ruling affirming the “one person, one vote rule” with even conservative justices joining with their liberal counterparts in the most recent case.