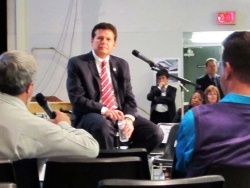 Assemblymember Block discussed the basic tenets of the proposed budget. Next, Corinne Wilson, lead research and policy analyst from the nonprofit Center for Policy Initiatives, gave a Powerpoint presentation covering state, federal and local revenue and expenditures as well as the budget's impact upon the state.

Questions were posed to the audience, such as:

Cuts proposed by the Governor include, but are not limited to, cuts to higher education from the University of California, California State University, and Community Colleges ($1.4 billion); elimination of hundreds of local redevelopment agencies ($1.7 billion); changes to the Healthy Families program ($135 million); welfare ($1.5 billion); child care ($750 million); and more. 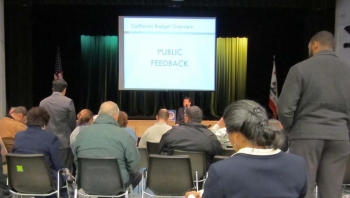 Citizens voiced concerns over several issues, such as how elimination of monies dedicated to redevelopment could negatively impact affordable housing, the impact of a sharp decrease in monies to higher education, and how a decrease in health and human services support could harm developmentally disabled citizens.

Ideas proposed included tax reforms for corporations and closing associated loopholes, discontinuing collection of state disability per paycheck if funds are being pooled and not used, discontinuing sales of state property for very low prices.

Generally, the consensus of the audience was to make cuts that would not impact higher education, low income housing and Healthy Families/Child Care.

The two hour meeting had a diverse turnout which largely included parents and senior citizens, with a few college students. Although some were clearly stressed over the issues, the tone remained respectable to everyone present and to all viewpoints. There was a clear line of communication between the Assemblyman and the constituency, which is being facilitated through feedback forms and audio/video that will be presented to the Assembly retreat happening shortly where concerns, ideas and solutions will be discussed from district representatives throughout the state.

When asked if the town hall turned out as he had hoped, Assemblymember Block said with enthusiasm that the turnout was “better than expected.” His constituents clearly responded favorably to the event and to Assemblyman's efforts to listen, so that all voices and viewpoints will be heard at the state capitol.

Assemblymember Block's office can be reached online at http://asmdc.org/members/a78/

For more information on the Governor’s budget proposal visit: http://www.ebudget.ca.gov.