All votes in the tri-county district have been counted in San Diego and Imperial Counties, but the 12,563 uncounted ballots in Riverside remain wild cards in the race.

Now a lawsuit has been filed by three voters (Naomi Ingram, Sherry Lynn Riegel and Jennifer Christina Riegel) along with the Riverside Democratic party, since a seat on the Riverside Democratic Central Committee is also in limbo. The voters say that they mailed ballots on time. But the Registrar of Voters failed to pick up their ballots from a U.S. Postal Service facility in Moreno Valley due to a miscommunication. A July 9 court date is set for the hearing.

The 36th State Senate district is another race that includes both San Diego and Riverside Counties.

Today, Paul Clay, the Democratic nominee in that race, called for Riverside County Registrar of Voters Barbara Dunmore to step down. 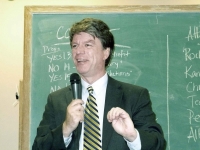 “Whether maliciousness or carelessness, she committed the gravest sin—failing to count thousands of ballots—and now she must go,” Clay, a teacher, stated in a press release. He also sought an explanation for the failure. “After deliberating since the election nearly one month ago, it is apparent that Barbara Dunmore is not fit to remain Registrar of Voters for Riverside County,” Clay concluded. Her office knew of the ballots left at the Post Office, he observed, adding that it was her responsibility to assure that these ballots were placed in the ROV’s custody. “Any other management employee in private business would have been summarily fired for a failure of this magnitude.”

Clay, who will face off against Republican Joel Anderson in November,  said his call for the Registrar’s resignation includes reasons beyond the 12,563 ballots left on the dock at the post office, citing “innumerable past failures.”

Dunmore has drawn considerable controversy in the past from election integrity groups.Voters, candidates and officials have complained of slow ballot counts, breakdowns at polling stations, and confusion over results, the Desert Sun newspaper in Palm Springs reports. As early as 2007, Brad Friedman, a journalist specializing in election integrity issues, ran a post at Bradblog.com headlined "How is it that Barbara Dunmorel has a job?"

Clay concluded, “In short, she has repeatedly failed in her primary task — simply counting the vote.” He added that he does not fault other workers in the Registrar’s office.

California Senate President Pro Tem Darrell Steinberg, D-Sacramento, who endorsed Salas, made the following statement on the Riverside debacle. “All the votes should be counted,” he said. “But once the votes have been counted and it's completed, I will welcome and look forward to working with whoever wins.”