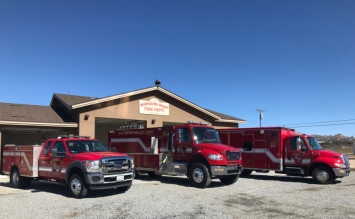 February 21, 2019 (Ranchita) – For years, residents of Ranchita, a small town between Borrego Springs and Julian, have complained about prolonged periods of time when their fire station was unstaffed, leaving their community without rapid response to medical emergencies and fires.

But now, just as area residents prepare to go to the polls in March to vote on a ballot initiative to determine the fate of the Julian-Cuyamaca Fire Department, the County Fire Authority and Cal Fire have announced that they have upgraded staffing at the Ranchita Fire Station to permanent full-time staffing and are in the process of boosting paramedic services.

“This addition of full-time, career staffing in the community of Ranchita is just the latest step that CAL FIRE and San Diego County Fire have taken to strengthen fire protection and emergency medical services in the backcountry of San Diego County,” said Tony Mecham, County Fire chief and CAL FIRE Unit Chief.

As recently as May of last year, a whistleblower provided records to ECM documenting that Ranchita's Fire Station was "dark" or closed for 15 days out of the month, as we reported at the time.

However, opponents of a county takeover of the Julian-Cuyamaca volunteer fire department have long pointed to the shuttered Ranchita Fire station under county control as a harbinger of what could happen in more areas if the district is dissolved.

Since 2008, the County Fire Authority and CAL FIRE have reorganized fire services in the backcountry. At that time, they took 18 volunteer-run departments and unified them under the County agency. The community of Ranchita is located nine miles southwest of Borrego Springs was once staffed by volunteer reserve firefighters.The Montezuma Valley Volunteer Fire Department began providing volunteer firefighting services to the community in 1977. After more than 30 years of service, however, the all-volunteer department joined the San Diego County Fire Authority in 2008. 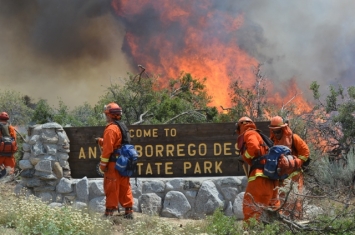 Photo, right: Ranchita firefighters helped battle a blaze in 2012 that scorched over 22,000 acres, including portions of Anza-Borrego Desert State Park.

According to a county press release, Ranchita Fire transitioned to its first professionally staffed shift in January with CAL FIRE/San Diego County Fire firefighters providing fire protection and emergency medical services 24 hours a day, seven days a week. The station now provides Basic Life Support emergency services but is in the process of transitioning to Advanced Life Support-Paramedics emergency services, which is the highest level of pre-hospital care, according to the county, with the transition is expected to be completed by late fall this year.

Ranchita firefighters may respond to an emergency incident with up to two fire vehicles. The station has three types of fire apparatus assigned for emergency response:

The County press release did not state exactly how many firefighters are assigned to the station. That’s an important point, since firefighters are not allowed to enter a burning building if an engine is manned by only two firefighters, for example.  There is also no guarantee that permanent staffing will continue year-round in the future.

As of 2019, the Fire Authority covers 1,500 square miles of unincorporated San Diego County and is staffed by about 540 career firefighters. The County Fire Authority also supports 120 reserve firefighters through its unique training program that pairs seasoned firefighters with volunteers to develop their skills. To date, the County Fire Authority has strategically upgraded 15 of its fire stations to include Advanced Life Support Paramedic engines. It has also upgraded and standardized all fire apparatus, including replacing nearly all structural firefighting engines, and adding new wildland patrol engines, bulldozers and water tenders. The county contends that it offers the best potential for protection for residents in the district.

Chief Mike Van Bibber with the Julian-Cuyamaca Volunteer Fire Department says that while it’s a good thing for the county to upgrade staffing, he is skeptical about their motives and timing.  “People have been screaming out there for a couple of years now,” he says, calling the action a “political move.”

He adds, “My question is, what station now has no one?” He says that the County Fire Authority doesn’t have enough firefighters to fully cover all stations. As a result, Chief Bibber says, “It’s a shell game.”

Van Bibber has successful recruited some 50 people interested in becoming volunteer firefighters and recently announced around 25 had completed a training academy, with another session planned.  Those opposed to the takeover argue that it’s important to have locally based firefighters on hand 24/7, 365 day a year, who know the backroads and who can’t be dispatched elsewhere should a major wildfire occur away from the community.  They have pointed to long response times under county control along the highway between Ramona and Julian, among other criticism.