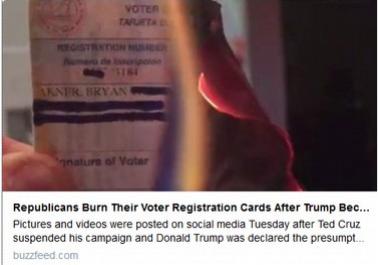 Trump responded by suggesting that millions more would burn their registration cards if he is denied the nomination.

The voices of Trump dissenters within the GOP ranks are broad and varied.

Ben Howe, editor of the conservative RedState blog, indicated he will vote for Democrat Hillary Clinton, tweeting, “#ImWithHer.”  Later he elaborated, “I am a fiscal conservative and I am a social conservative. That will not change. But I will not vote for an egomaniacal authoritarian.”

He’s not alone.  A Field Poll in April found that in California, 16% of Republicans said they would vote for Clinton over Trump, who has alienated many with his blustering style and negative statements regarding Mexican immigrants, women, Muslims, the disabled and even his fellow Republican opponents.

Reince Priebus, Chairman of the Republican National Committee, said the RNC will get behind the presumptive nominee. He reflected, “Something different, something new is probably good for our party.”

At San Diego Rostra, a political discussion site, conservative and libertarian-leaning voters posted their reflections on a Trump nomination.

Barry Jantz, Grossmont Healthcare District manager and former La Mesa Councilman, wrote, “I’m disenchanted with the GOP, not because Republicans are nominating Donald Trump; but because the country’s Republican leaders are so out of touch with the electorate that — through their own ineptitude — they unwittingly created an environment accepting of him.”

Republican Craig Maxwell, a former La Mesa mayoral candidate and bookstore owner, offered a historical perspective – and a remedy:  “Early in the Twentieth century, Republicans vied with Democrats for the progressive label. Parties change. The essence of conservatism, however, does not. If the nihilistic opportunism of Donald Trump represents the new face of Republicanism, (real) conservatives will “simply” leave the party and found another.”

Some prominent Republicans have said they will skip the Republican convention, including former Presidents George W. Bush and George H.W. Bush.

Locally, Congressman Duncan Hunter has emerged as a strong supporter of Trump, citing “national security, border security, and trade agreements” as his reasons.

“We are all RINOS (Republicans in name only),” wrote Elliott Schroeder, a Republican Central Committee candidate, who noted Trump’s history of  changing positions on issues ranging from abortion to healthcare to guns.  He suggested that Trump’s nomination signals the end of the Reagan-era coalition of defense, economic and social conservatives.

“But what coalition is there for Trump to build? What Republicans are there now?” Schroeder asked, then offered his solution to restore party unity. “Simply, there are two. Trump supporters and Hillary opponents. Start building.”

Some Democrats meanwhile have taken to Twitter  striving to unify their party's supporters of Hillary Clinton and Bernie Sanders in order to defeat Trump in November, with a new motto: "Vote blue, no matter who."

The Republican Party has been asking me to hold my nose and vote for the lesser of two evils for the last thirty years. Now they don’t seem to be able to take their own medicine.
If it wasn’t for Trump we would be looking at Jeb as the anointed, next in line candidate. Just like McCain Romney and the rest of the folks that run like they are Libertarians and then if elected, govern like Democrats.
Suck it up Republicans YOU CREATED THIS!!