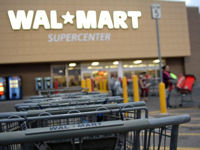 December 22, 2011 (National)  -- Wal-Mart pulled a batch of its infant formula from more than 3,000 stores when it learned about the death of a newborn. There is no known link between the death and the formula. Also, the government has not ordered a recall of any Enfamil made by Mead Johnson, the brand of powdered formula that the child consumed.
The retailer said on Wednesday that preliminary tests indicate the newborn Missouri boy died from a rare bacterial infection.  Mead said its records showed the lot of formula from which the child was fed tested negative for the bacterium before it was shipped.
Wal-Mart Stores Inc. said that the formula, lot number ZP1K7G, was pulled "out of an abundance of caution."
Mead Johnson spokesman Christopher Perille said that all of the company's infant formula products are put through a battery of tests as they are produced, packaged and sealed.
Public health investigators seeking the source of 10-day-old Avery Cornett's infection will also look at environmental factors, such as the water used in preparing the powdered formula, and at anything else the baby might have ingested.
For further information see CNN news link: