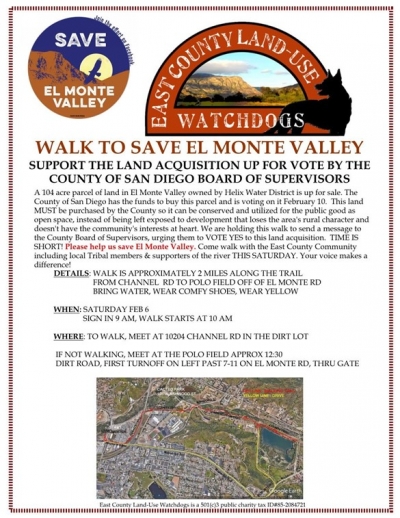 February 3, 2021 (Lakeside) – County Supervisors will vote February10 on a proposal to purchase a 104-acre parcel of land in Lakeside’s El Monte Valley from the Helix Water District. This Saturday, Feb. 6, a “Walk to Save El Monte Valley” will be held by East County Land-Use Watchdogs, a 501c3 nonprofit, along with Save El Monte Valley.  Supporters are also urged to sign a petition that has gathered nearly a thousand signatures so far.

Walkers should meet at 10204 Channel Rd. in the dirt lot for the two-mile walk, which is organized by Save El Monte Valley and the East County Land-Use Watchdogs. Arrive at 9 a.m. for the walk starting at 10 a.m. Masks are required. Participants are urged to wear yellow, comfortable shoes, and bring water.

“This land MUST be purchased by the County so it can be conserved and utilized for the public good as open space, instead of being left exposed to development that loses the area’s rural character and doesn’t have the community’s interests at heart,” the flyer states. “Come walk with the East County Community including local Tribal members and supporters of the river this Saturday. Your voice makes a difference!”

Supervisor Dianne Jacob had initiated the proposed land purchase, but the vote was postponed. Jacob left office in January due to term limits so now a new Board of Supervisors including Joel Anderson, the new Supervisor filling Jacob’s former seat.

Organizers also urge residents and members of the public to contact County Supervisors including Supervisor Joel Anderson, whose district includes the El Monte Valley, to urge his support for the proposal.

An earlier parcel in the valley sold by Helix Water is proposed for a massive sand mine, which many residents vehemently oppose due to noise, dust, impacts on equestrian-based businesses and destruction of wildlife habitat.

"The El Monte Sand Mine project had been postponed for 1.5 years,"says Billy Ortiz, a co-organizer of the walk along with Barona Tribal member Bobby Wallace. "The sand miners, Horizon Hill El Monte Investors LLC,  have started up the permit process once again and intend on mining sand for the next 20 years. This will devastate our community and a pristine section of the San Diego River along a 3 mile stretch in the El Monte Valley. We are united in the effort to try and protect this last untouched Valley in the East County of San Diego."

Anyone not walking who wants to show support for the cause can meet at the Polo field around 12:30 p.m. along a dirt road at the first turnoff on the left past the 7-11 store on El Monte Road, then go through the gate.

For more information, visit the East County Land-Use Watchdogs on Facebook at https://www.facebook.com/ECWatchdogs/.