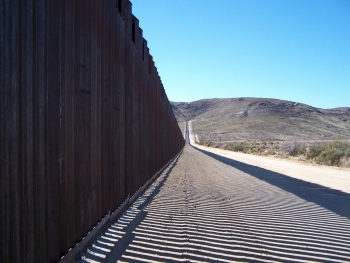 Trump ordered building a wall along the Mexican border, but his proposals to pay the tens of billions of dollars cost for the wall have hit roadblocks even among some prominent conservatives and prompted Mexico’s president Enrique Peña Nieto to cancel a planned meeting in Washington D.C.

Trump, who has pledged mass deportations of undocumented immigrants, also ordered a crackdown on sanctuary cities sheltering immigrants from deportation, threatening to take federal funding away.

These proposals drew harsh criticisms on both sides o the political aisle locally. The proposals come at a time when illegal immigration has already dropped to the lowest rate in 40 years and a recent Morning Consult/Politico poll this week shows only 47% of voters support building a border wall.

During his campaign, Trump promised to make Mexico pay for building a wall along the entire U.S.-Mexican border. Mexico’s president has repeatedly said Mexico will not pay for the wall.

Today, White House press secretary Sean Spicer suggested Trump could order a 20% tariff, or tax, on all goods imported from Mexico—enough money in theory to potentially cover costs of the wall, since Mexican imports into the U.S. are valued at $316.4 billion annually per the U.S. Trade Representative’s office.

But that would drive up costs to consumers—ultimately making the American public foot the bill through higher prices on goods made in Mexico, or with parts made in Mexico. That’s everything from cars to tequila, avocados to computers. In addition, Mexico has threatened to retaliate by taxing U.S. products sold in Mexico, prompting a trade war that could leave the United States a loser.

Edward Alden, a trade expert at the Council o n Foreign Relations, told CNN that it’s “a falsehood” to say the tariff would force Mexico to pay for the wall. “It’s a way of forcing American consumers to pay for the wall,” he said.

After an uproar from lawmakers in both parties, Spicer backtracked, saying that was just one idea. He hasn’t revealed any other proposals to fund the wall.

Senator Lindsey Graham, a South Carolina Republican tweeted, “Border security yes, tariffs no. Mexico is 3rd largest trading partner. Any tariff we can levy they can levy. Huge barrier to econ. Growth Simply put, any policy proposal which drives up costs of Corona, tequila, or margaritas is a big-time bad idea. Mucho sad.”

Arizona Senator John McCain, also a Republican, also opposed any effort to restrict or impose new barriers on trade with Mexico or Canada. He warns of a trade war that could drive up the national debt.

San Diego Mayor Kevin Faulconer, a Republican considering a run for Governor, is a backer of San Diego and Tijuana as a binational region.  He slammed Trump’s proposals, stating, “San Diego already has a border built by the Feds. Cross border trade creates jobs. Our binational economic and cultural ties have my full support.”

Congresswoman Susa Davis (D-San Diego) whose district includes portions of East County, calls a border wall a “simplistic approach to a complex problem” that would cost billions to build and millions more in tax dollars spent on seizing private properties through eminent domain to build the wall, as well as defending against environmental lawsuits.  She adds, “Compelling local law enforcement to take on immigration means less time for them to focus on their primary responsibility – protecting our communities. Punishing cities by stripping federal resources will only further diminish the ability of local law enforcement to serve and protect.”

Congressman Duncan D. Hunter (R-Alpine) has been a supporter of Trump and the border wall.    In a January 6th interview on Fox News, Hunter said it would be a mistake for Trump to rely on a “virtual wall” of sensors since that was tried during the George W. Bush administration and failed, a “billion-dollar boondoggle” in Hunter’s words.  But a solid wall is also not necessary, Hunter suggested, noting that San Diego’s “simple yet extremely effective” model of two layers of fencing separated by a high-speed border patrol road equipped with high tech bells and whistles cut smuggling of people and narcotics by 90 percent.

State Senator Toni Atkins (D-San Diego) called Trump’s executive orders “irrational, mean-spirited and misguided.” she added that she would like to give Trump a tour of City Heights in San Diego “to show him the kinds of people and communities he’s turning his back on.  To close America’s doors to people seeking freedom and a better life is shameful. I hope and pray that Mr. Trump is soon visited by some better angels.”

California’s U.S. Senator Kamala Harris says the law will tear families apart and jeopardize national security. She adds that “telling cities they must deny public safety, education and health care services to children and families living within their jurisdiction will not make us more secure, it means fewer crimes reported and more families living in fear.”

Assemblywoman Lorena Gonzalez Fletcher (D-San Diego) stated, that Trump’s action will “jeopardize the lives of thousands of innocent men, women and children who are in harm’s way.” She called Trump’s proposals “embarrassingly un-American.”

In California one in every four people came here as immigrants, contributing substantially to the state’s economy.  Now California Senate leader Kevin DeLeon has introduced Senate Bill 54, the California Values Act, that would prohibit use of state or local resources to carry out work of federal immigration officials to deport immigrants and avoid breaking up families.

Additionally, Governor Jerry Brown issued a defiant statement in his State of the State address this week, stating, “Let me be clear: we will defend everybody—every man, woman and child who has come here for a better life and has contributed to the wellbeing of our state.”

Don't we already have a wall in San Diego County? Big wall here in Campo.

Technically we have mostly a fence or double fencing, not a solid wall, in most of SD County, but it is still a barrier that's been effective even according to wall advocate Duncan Hunter.  We also have beefed up militarization of the border with added patrols, drones, etc.