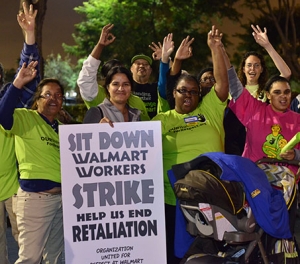 November 28, 2014 (San Diego)— “This Black Friday, there will be a different kind of crowd at Walmart stores around the country,” says Cynthia Murray, a Walmart worker seeking to make change at the nation’s biggest retailer.

She explains, “Workers like me are going on strike, and we’re bringing our communities out to call for an end to Walmart’s unfair labor practices. As Walmart workers, we are sick of struggling to put food on the table while our hard work makes the country’s wealthiest family, the Waltons, even richer. But when we speak up for fairer treatment, we face threats and harassment from our managers. We’re striking to show Walmart and the Waltons that we can’t be silenced.”

Members of the public who wish to show supporter for Walmart workers can call 1-855-626-6011, enter your zip code and be connected with a Walmart near you.  You can then ask to speak with a manager and tell him or her that you’re calling to stand with Walmart workers who are on strike.

“Walmart tracks these calls, and they make a major impact,” Murray says. “When thousands of us make calls to Walmart stores nationwide, it will go a long way to show the company that the public stands on the side of workers.”

Walmart makes $16 billion a year in profits and the Walton family is worth over $150 billion, making them the richest family in America, according to Yahoo Finance.  But Forbes reports that Walmart costs American taxpayers $6.2 billion a year in public assistance for Walmart workers, since many must rely on foodstamps and other public assistance due to Walmart’s low wages. Bloomberg News reports that Walmart pays the majority of its associates less than $25,000 a year.