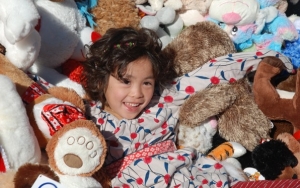 November 7, 2015 (San Diego)--The San Diego Regional Law Enforcement Teddy Bear Drive is putting out an all-points bulletin on new, tagged, huggable stuffed bears and they are asking the public to “turn them in” at law enforcement stations and San Diego County Chick-fil-A restaurants. The stuffed animals will be donated and delivered on Dec. 8 to Rady Children’s Hospital to comfort sick and scared children.

The 25th annual drive is coordinated this year by the San Diego County Probation Department and the Coronado Police Department. Chick-fil-A, a corporate supporter, is hosting the kickoff event from 5 to 7 p.m. Nov. 10 and will donate a free chicken sandwich meal or nuggets kid’s meal to those who bring in a brand new stuffed bear with tags still attached to any of its nine area stores during the special event. Area law enforcement will have representatives there and emergency vehicle displays as well as Chick-fil-A’s “Eat Mor Chikin” Cow for photo opportunities with the public.

“I’m very excited that the Teddy Bear Drive has taken on a life of its own,” said Coronado Police Officer Brian Hardy, who started the drive in 1990. “This is all for the kids.”

Hardy started the teddy bear drive after he got lost while at Rady Children’s Hospital and came upon an empty holiday toy donation bin. With just a few weeks until Christmas, he bought a dozen bears and delivered them in uniform in his patrol car on his own time in the name of the Coronado Police Department.

Since that time, the drive has grown from others in his department participating to every law enforcement agency in the San Diego region joining in. Upwards of 60,000 stuffed animals are now collected each year. Cash donations allow teddy bear drive coordinators to replenish the supply of stuffed animals when those run out so that every child admitted to the hospital year-round receives a stuffed animal. Money is also donated toward special keepsake memory boxes and comfort bears for the parents of children who pass away while a patient at Rady Children’s.

While the Teddy Bear Drive has various generous business and community group supporters, the bulk of the donations are from local law enforcement. Hardy said that while he started it, he does not take ownership of the event because all the officers actually go out and collect the bears and make monetary donations. Even though Hardy is retiring at the end of December, he said he feels like the drive is part of him and he will continue to serve on the planning committee and donate.

Another intent of the teddy bear collection is to let officers who often witness children in traumatic situations do something positive for children. In several instances the drive has also touched some officers personally when their own child or family member was sick.

In the eighth year of the teddy bear drive, and the day before officers delivered the bears to the hospital, Hardy’s 2-year-old daughter became critically ill from a ruptured appendix. He didn’t tell anyone his daughter was a patient but the word got out and she was given a teddy bear and was visited by San Diego Chargers players that day. After she was released, Hardy doubled his efforts to collect more stuffed animals for the hospital.

In 2005, County Probation Officer Sean Griffin’s child was admitted to the hospital and received a teddy bear. Later, he spoke about it to Hardy who was on the same drug task force as him. Griffith said he got County Probation on board and they have been involved since then.

“For Probation, we have been participating in this event for 10 years now and initially got involved because one of our officer’s kids was admitted to Children’s years ago,” said Deputy Chief Probation Officer Cesar Escuro. “And most recently, my 7-year-old son had gastrointestinal problems and was a patient at Children’s for four days. One of the things that really made him feel better was when one of the nurses gave him a stuffed animal. The look of comfort on his face brought comfort to me. So now it really hits home because that was just two months ago.”