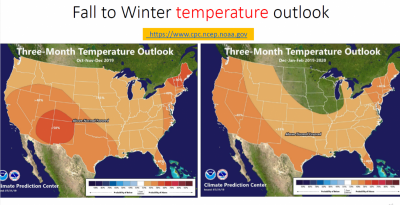 August 27, 2019 (San Diego) -- The National Weather Service in San Diego has released a new video with the fall and winter outlook.  The prediction is for warmer than average fall and winter weather, with near average to below average precipitation, though atmospheric rivers are still possible, says meteorologist Alex Tardy.

This summer was warmer and drier than average in the deserts and mountains.  A persistent weather pattern with an upper level ridge dominating in the north Pacific area since spring has suppressed monsoonal moisture.

Ocean temperatures in the Pacific have been very warm and above average, without El Niňo conditions.

The warm weather follows on a year of record-breaking heat locally, nationally and globally as G-7 leaders this week convene with an emergency agenda to address climate change, with the exception of President Donald Trump, who did not attend the climate change talks and has declined to take any actions to address what other world leaders call the planet’s most critical problem.