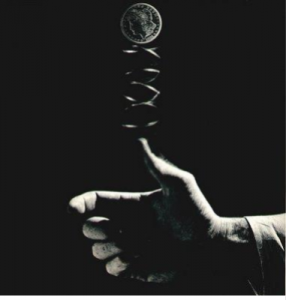 By Miriam Raftery
Photo via CC by NC-ND:  a coin toss or other game of chance will determine the outcome in this race
Update December 16, 2020:  Gene Doxey won the coin toss -- and the seat on the Warner Sprngs Unified School District board.
December 9, 2020 (Warner Springs) – It’s been a wild week in Warner Springs.  First, an earthquake centered near the tiny mountain town jolted residents awake on Sunday morning. Then high winds prompted SDG&E to shut off power in the area for multiple days, forcing closure of schools in the Warner Springs Unified School District.
Now, an election for one of three seats on the school board has ended in a draw. Gene Doxey and Terry Cox each got 352 votes, tying for third place. There’s an important lesson to be learned for parents and students:  every vote counts!
Voice of San Diego opined that the tie “may be the most exciting thing to happen in the Warner Springs area since federal soldiers nearly got in a shooting war with a band of Confederate sympathizers during the Civil War.”
The rural district spans 420 square miles which encompass sprawling ranches, small towns and Native American communities. In a throwback to the pioneer era, the district has just 230 students and serves students from preschool through 12th grade, unlike larger urban areas where high schools are in separate districts.
The district has had close races before, decided by margins as slim as a single vote. But this is the first time an election ended in a dead heat. In fact, Registrar of Voters Michael Vu says this is the first time anywhere in the county that he can recall in the 24 years he’s held the office.
So how will the tie be resolved?
Run-offs, duels or wrestling matches—all ideas bandied about in recent close local races and on social media – are not allowed in California.
State law requires that the winners in tie races be determined by random draw or a game of chance. Vu has told ECM that this could include drawing straws, a card game, or flipping a coin.
Both Doxey and Cox ran on a slate of three candidates trying to gain a majority on the board. The third candidate on their slate, Byron Anthony Klemaske II, lost, coming in last in a field of six.  Two incumbents, Melissa Krogh and Melody Sees, won reelection.
After realizing that only one of their slate will be seated on the board, Doxey told the San Diego Union-Tribune that he offered to step down and let Cox take the seat. But Cox noted that Doxey, a retired teacher, has more experience.
Yet even if a candidate were to withdraw at this late date, state law still requires that the coin toss or other random act must be held – with the lucky winner taking the seat.
Of course, the winner could resign after the coin toss or other  random act to choose a winner. But that would allow the board to appoint anyone they choose to fill the vacancy—not necessarily the runner up.
So Doxey and Cox have  agreed to let the outcome be determined by fate –or perhaps, divine intervention, as the two have suggested, stating, “Let’s let God decide.”
You can watch the tie-breaking determination during the school board’s virtual meeting on Zoom Monday night at https://zoom.us/j/3046344158?pwd=SlZvT2syeFRpOEh1bUw3YUM2Z1J6QT09. The meeting ID is 304 634 4158 with a passcode of 2s2gDx.