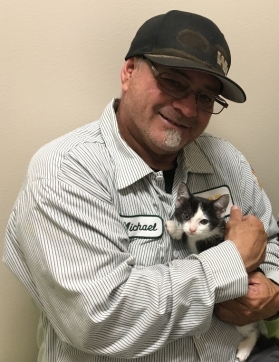 June 15, 2018 (El Cajon) - A kitten who narrowly escaped death is now safe and sound in his new home, after being adopted by the Waste Management driver who rescued him.

In March, East County Waste Management driver Michael Cabrera was ending his shift with his routine safety inspection of his truck, when he noticed a cardboard box stuck in the grate of the truck’s compactor blade. Inside was a tiny kitten, with his umbilical cord still attached.

“I don’t know how long he was in my truck and how many times that compactor blade went right by him,” said Cabrera, who rushed the kitten to the El Cajon Animal Shelter which is located adjacent to the Waste Management facility in El Cajon.

The kitten was immediately treated by the shelter’s veterinarian and placed in a foster home, where he received 24-hour care. He was given the name William, to include the letters W and M as a tribute to the Waste Management driver who rescued him.

Once William reached a healthy weight, the staff at the El Cajon Animal Shelter and his foster care provider made sure Cabrera was given the first opportunity to adopt him.

William is now thriving in his new home. “He is the king of the castle at our house and is getting lots of toys and attention from me and my wife,” Cabrera said.

The El Cajon Animal Shelter cares for stray pets found within the cities of El Cajon and La Mesa. Animals not claimed by their owners are placed up for adoption