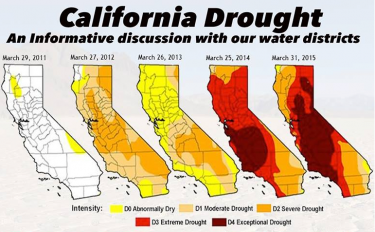 All three districts are working to make sure their customers comply with Governor Jerry Brown’s order for 25% cuts in water use statewide. But their approaches vary, ranging from educating consumers to offering rebates to one district readying to impose fines on heavy water users.

All districts: Customers are asked to cut 20-25%. Watering days are limited to twice a week and some irrigation forms are limited to just 10 minutes at a time if you rely on spray nozzles. But there are exceptions for drip irrigation, soaker hoses, rotating nozzles, smart controllers and other water conserving methods. For instance, soakers or drip lines can be run for several hours to irrigate orchards. You should irrigate before 10 a.m. or after 6 p.m.

There are also exceptions to keep landscaping alive for wildfire defensible space and slope stability.  Districts are notifying customers of obvious water leaks and you are required to fix leaks within 3 days.  It is illegal to water during a rainstorm or within 48 hours after significant rainfall. There are rebates available for items such as turf replacement,  rain barrels and water-efficient irrigation upgrades.  If you opt not to replace lawns, mulching is recommended to keep grass alive during summer months.

Restaurants may serve water only on request and hotels must offer guests the option not to wash towels and linens daily.

Carlos Lugo, general manager of Helix Water District, spoke first.  Like all of the agencies, Helix has learned some lessons from the 1991 drought, Lugo said.  Back then, the district was 90% on imported water.  “By 2020 that will drop to 30%,” he said.

In the Helix district, 80% of water is used by residential customers. So the district has imposed limits on outdoor watering to just two days a week.  Helix customers can choose which days to water, though.

If the district doesn’t cut 20% in its service area it could face fines of $10,000 a day.  Unlike Otay or Padre, the Helix board has voted to impose fines on water users who exceed 30 units of water in a 2-month billing period.  (A unit equals 758 gallons.) The average residential use is 26 units every 2 months.  A warning will be sent before fines are imposed.  Fines will be 55 cents for each unit over 30.

Helix is holding workshops for landscapers and others. “We are not anti-turf. We are not anti-tree,” Lugo insisted.  “You can modify watering so plants can survive.” Besides targeting outdoor water use, the district is also encouraging conservation indoors through tactics such as water-wise appliances and grey water systems.

Cal Trans has cut its water use 50% in the Helix district.

During a question session, Lugo was asked why Helix went straight to fines without giving customers a chance to comply voluntarily first, as the other two districts are doing.  He said penalties are a “price signal…We’ll be evaluating how customers respond.”

Padre relies on 100% imported water.  “That’s a challenge,” McChesney said. After the last drought in 1991, Padre customers cut water use 29% and they have never rebounded to pre-1991 levels. “So it’s hard to ask them to cut more, but we must,” said McChesney.

All three water districts voiced objections to the Governor’s equal cuts ordered statewide, which fails to take into account huge conservation efforts made in district’s like Padre.

Now Padre Dam district is working on outreach and enforcement. “We want to give our customers the opportunity to reach goals without penalties,” McChesney explained.  The district is also limiting watering to two days a week, and further is requiring those with odd-numbered addresses to water only on Sundays and Thursdays, while even-numbered addresses should water on Wednesdays and Saturdays. So far, that’s been “very successful,” she added.

Padre has also made automated calls asking customers to cut water use 20% and telling them about the assigned watering days.

The Padre district is also focusing its efforts on high water users, with some remarkable success stories.

“We met with the city of Santee and found a cost-effective way to change a large area of turf to use recycled water—that will save 37% of the irrigation bill for the entire city of Santee,” McChesney revealed. Another example is an avocado farmer who cut water use 15%.

All water saved by Padre customers will remain in the district, stored at the San Vicente Reservoir with its newly raised dam.

Mark Robak, a director with the Otay Water District, said Otay also learned the importance of conservation in 1991 when Metropolitan Water, its supplier, voted for 50% cutbacks.  “That was devastating for our region,” he recalled. “It was our wake-up call. We never wanted to be caught with just one supplier again.”

Robak also noted that some areas of the state are in far more dire straits.  Some towns are running out of water and Central Valley farmers are forced to truck in water or fallow their fields.

Otay started using recycled water in 1991. “In Chula Vista, you’ll see wide parkways with green landscaping, all using recycled water,” he said.  “Otay made a deal with Imperial Irrigation, which has the largest entitlement ot Colorado River Water.” Under the deal, farms in Imperial Valley would conserve water with help from Otay lining canals, and Otay could use the water saved.

Water rates in the last 10 years have doubled in the Otay District. For that money, the district has added two large reservoirs and now has “99% water reliability. If we took no water from Northern California, we would still have 97% water reliability.”

Unlike Helix, Otay is not imposing penalties but instead relies on volunteer compliance.  Otay has a very high water efficiency rate, with only 3.5% water waste even including firefighting and flushing lines. It’s working to get that down to 3%.  By contrast, some urban areas elsewhere have waste as high as 50%, Robak said.  Countywide, the San Diego region’s water waste is a scant 5%, with the rest pumped and retreated.

Paying for future desalinization of sea water costs Otay district residents $5 a month.  Otay is also looking into an desalinization plant partnership in Mexico that could enable Otay to bring some water back across the border.

Robak urges the public, “Don’t move away from San Diego based on the water squeeze.” He adds the some new residential building growth is needed and can be accommodated to meet housing needs “for your kids.”