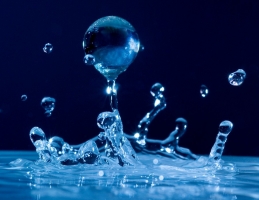 March 31, 2013 (San Diego) On March 27th the San Diego Water Authority Board Of Governors voted to authorize the 2013 Regional Water Facilities Optimization and Master Plan Update that aims to take us into the 2030s. The plan states that one of its principal goals is the creation of a Climate Action Plan (CAP). The guiding document reads as follows regarding climate change:

There is general consensus among the scientific community that certain human activities have caused increases in atmospheric GHG concentrations, which in turn have lead to changes in climate. Such human activities include land alterations that reduce the Earth’s carbon uptake capacity (such as deforestation), and emissions of GHGs (green house gasses) into the atmosphere that had previously been stored below ground. GHG sources include tailpipe emissions from vehicles, combustion of fossil fuels for home heating and electricity production, and industrial and agricultural practices.

Two potential response paths can address the risks posed by climate change: mitigation and adaptation. Mitigation acts to reduce the magnitude of future climate change, and adaptation acts to adjust to the new conditions or moderate their impacts. Mitigation efforts include reducing GHG-emitting activities or developing additional GHG capture systems (such as tree-planting); these efforts are the focus of this CAP. Adaptation actions include limiting vulnerability to climate-change impacts through various measures, while not necessarily dealing with the underlying cause of those impacts. Adaptation actions can also act to mitigate emissions, but that is not their primary intent (Figure 1.2). Efforts to help the Water Authority adapt to future impacts of climate change were addressed in the Water Authority’s 2010 Urban Water Management Plan (2010 UWMP); the purpose of this CAP is to reduce GHG emissions. http://www.sdcwa.org/sites/default/files/files/master-plan-docs/06_CAP_w_appendices.pdf

This plan is also guided by Assembly Bill 32 “Global Warming Solutions Act,” which mandates the agency to reduce it’s output to 1990 levels by 2020. http://www.arb.ca.gov/cc/ab32/ab32.htm

The plan also has to take into account the reality that economic and population growth will continue in the region, therefore the plan intends to diversity its water sources as much as possible. Among them is the desalination plan in Carlsbad. This plant is to serve the communities of Carlsbad, Oceanside and Vista, and is to use the existing power plant on the property to drive it.

The goal of this is two fold. To maintain a diversified water source and to be ready for a disaster, ranging from drought to an earthquake for example. Therefore the plan contemplates desalinization plants, as well as reservoirs and also recycling some water into non-human consumption.

The plan however, has its critics. In an e-mail release the San Diego Coastkeepers says, “We’re upset that an agency as important as the County Water Authority has sidestepped an opportunity to safely and economically usher the region into a new water supply paradigm,” according to San Diego Coastkeeper’s Matt O’Malley. “The Water Authority needed to consider the amount of energy it takes to supply water and, through a water loading order, prioritize the least environmentally-damaging sources. This would have led to water supply solutions that better protect the environment and reduce costly infrastructure needs.”

San Diego Coastkeepers also does not believe water desalinization plants should even be part of the plan. The group’s release states that “It’s not a secret recipe; we’ve been saying it for years: reduce, reuse and then recycle,” says O’Malley. “Long-range plans like the Master Plan should reflect these values through greater conservation targets that reach beyond the minimum requirements set by law and through water reuse so that we use every drop most efficiently—multiple times.”

The Cleveland National Forest Foundation, through the law firm of Shute, Mihaly and Weinberg, addressed the Board of Directors regarding the final product. According to the law firm, the plan’s emphasis is clear--that the water sources are now deemed coastal, encouraging growth without solving water issues in the inland areas. The foundation takes the Poseidon Water Desalinization project head on, claiming the plan does not take into account the climate change impact of the plant, or the fact that “The Water Authority claims that its decision to ignore the Carlsbad plant is sanctioned by the Local Government Operations Protocol. It is mistaken. Not only does the Water Authority have substantial financial control over the joint-venture project, it has operational control as well.”

The desalinization project is a private-public enterprise and the site chosen is adjacent to a power plant. It will also serve the North County Communities. The desalinization plants are seen as one method to diversity water sources in the County of San Diego, where the Water Authority anticipates future growth.