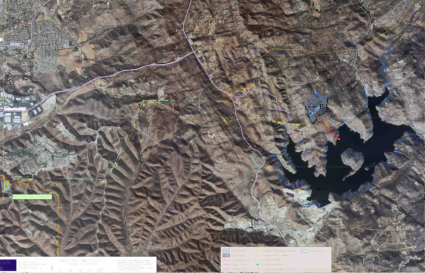 July 19, 2017 (San Diego) - The San Diego County Water Authority this week issued a Request for Proposals for a potential joint energy storage project with the City of San Diego that could lessen upward pressure on water rates and also increase opportunities for renewable energy penetration throughout the region by leveraging existing infrastructure at San Vicente Reservoir.

The potential project would consist of a closed-loop interconnection and pumping system between the existing San Vicente Reservoir (which is owned by the City of San Diego) near Lakeside and a new, smaller reservoir located uphill. The system could provide up to 500 megawatts of renewable energy. It would be used during off-peak energy-use periods, pumping water uphill to the new upper reservoir to create a bank of stored hydroelectric energy. That energy would be released to the lower reservoir by gravity at times when other renewable energy supplies, such as solar, are unavailable and when energy demand and electricity costs are higher.

In addition to potentially adding renewable energy to the region, energy storage could support electrical grid operations that are essential to integrating large new supplies of other renewable electricity into the California and Western power grids - notably solar, but also wind. It also would make it easier to quickly ramp up or down energy generation as needed.

“This potential project is an exciting and innovative opportunity to optimize our water facilities to benefit our ratepayers while helping the region as a whole meet its energy needs,” said Mark Muir, chair of the Water Authority’s Board of Directors. “The competitive bidding process will help ensure this potential project delivers maximum value.”

The Request for Proposals (RFP) calls for any interested parties to provide details of their full-service teams qualified to perform all activities to deliver an operational project. The Water Authority expects to evaluate received proposals this fall, and to seek approval from the Board to begin negotiations with a potential full-service team by the end of this year.

In March, the Water Authority’s Board authorized the agency to begin seeking detailed proposals for a potential energy storage facility at the reservoir after a successful gauge of interest in the potential project earlier in the year. That solicitation drew responses from 18 qualified entities.

The Water Authority already operates an energy storage facility at Lake Hodges, which in 2011 began its operations of pumping water to Olivenhain Reservoir and generating up to 40 megawatts of electricity on demand for the region through downhill releases. The agency’s San Vicente Dam Raise Project – completed in 2014 through a partnership with the city of San Diego – provided additional opportunity for energy storage because it created approximately 105,000 acre-feet of new regional carryover storage water supplies and 52,000 acre-feet of new emergency storage capacity, increasing the hydroelectric energy potential at the reservoir site. The Water Authority owns the additional storage capacity created by the dam raise and completed filling its carryover storage capacity in summer 2016.

To view the RFP, go to www.sdcwa.org/contracting-opportunities and click on “Current and Upcoming Solicitations.”

One of the Water Authority’s 24 retail member agencies, the city of San Diego maintains one of the world’s largest and most complex water storage, treatment, and delivery systems. The city’s Public Utilities Department imports water supplies for more than 1.3 million city residents, which are among the 3.3 million ratepayers served by the Water Authority.

This is a proven technology. I have camped near Senators Wash Reservoir where water is pumped to a higher elevation when electricity demand is low then used to power turbines during peak use times.
https://www.usbr.gov/projects/index.php?id=328